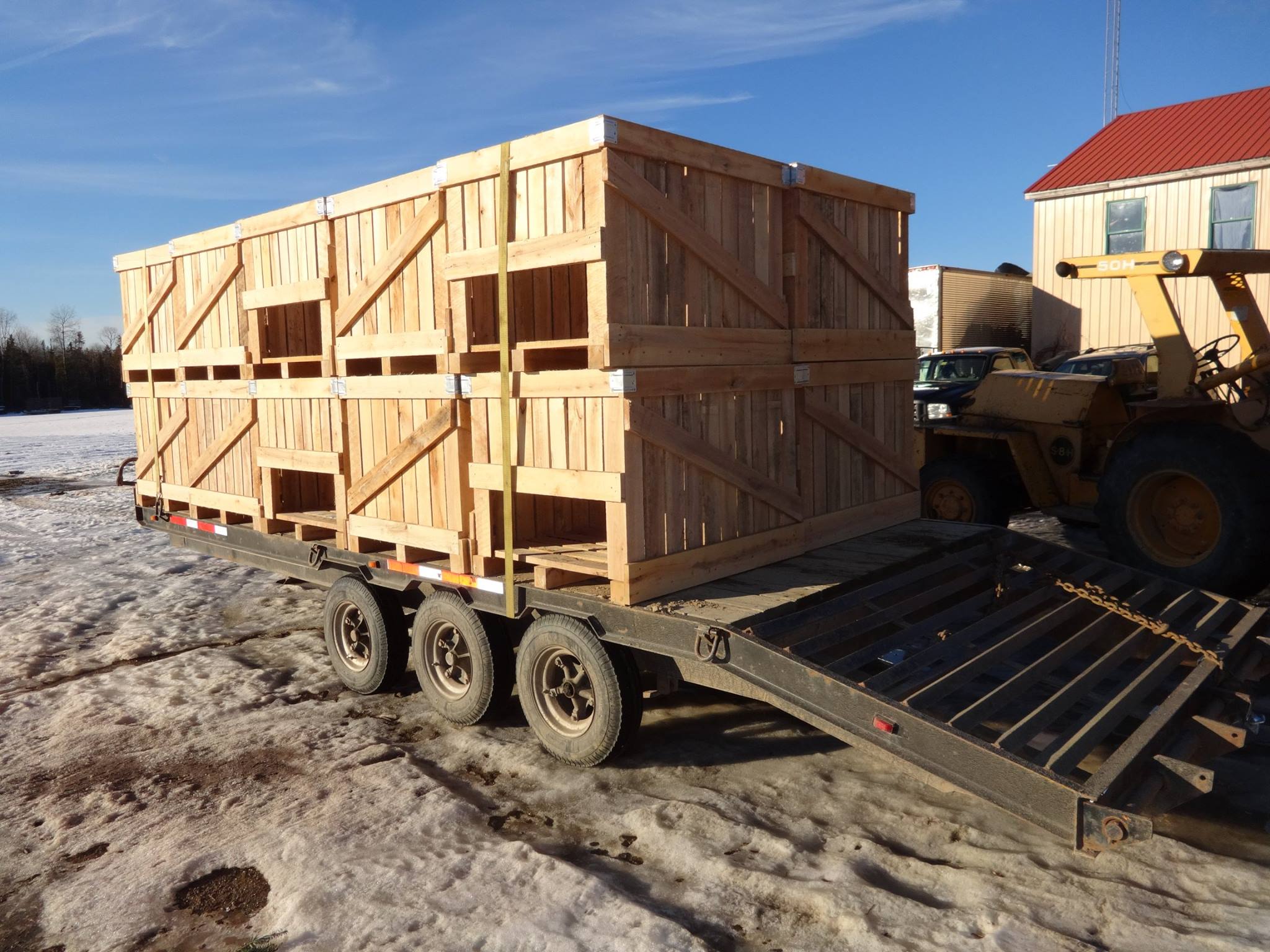 WOOD PRAIRIE FARM FIREWOOD STACKED AND READY FOR STORAGE. As a companion to the 'Maine Sawdust Flying' photo last evening, here is one showing the fruits of that labor. Twenty-six pallet boxes worth (each between a quarter and a third of a cord) of two-foot wood cut, split and stacked.
That the days only get longer from here on out after the Winter Solstice is a positive way to contemplate the cold coming to Northern Maine in January and February. Jim & Megan
Jim & Megan Gerritsen
Wood Prairie Farm
Bridgewater, Maine
www.woodprairie.organic
(207)429-9765 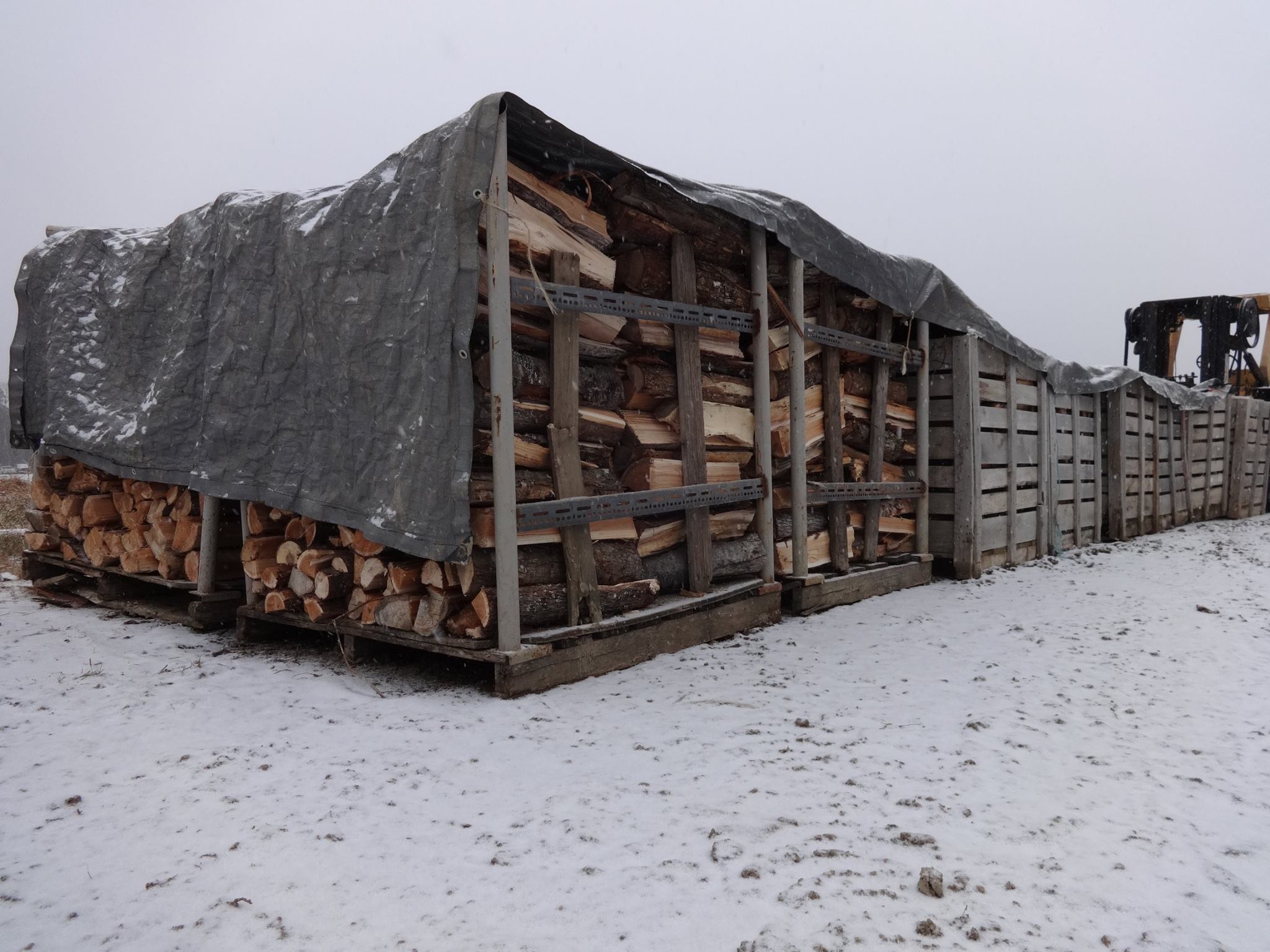 MAINE SAWDUST FLYING: FINISHING UP FIREWOOD AT WOOD PRAIRIE FARM. Last week – on a mild day in the high 20s with light snow – we finished up cutting, splitting and stacking firewood cut from our woodlot. Our son, Caleb, is sawing (yellow helmet and kevlar chaps) logs, Megan is running the wood splitter, Chelsea (red hair) is supplying Megan with sawed rounds, and Mickele (tan snowsuit) is stacking the split firewood into old pallet boxes. We're most of a year ahead, so much of this firewood will keep us warm next Winter. Jim & Megan
Jim & Megan Gerritsen
Wood Prairie Farm
Bridgewater, Maine
www.woodprairie.organic
(207)429-9765 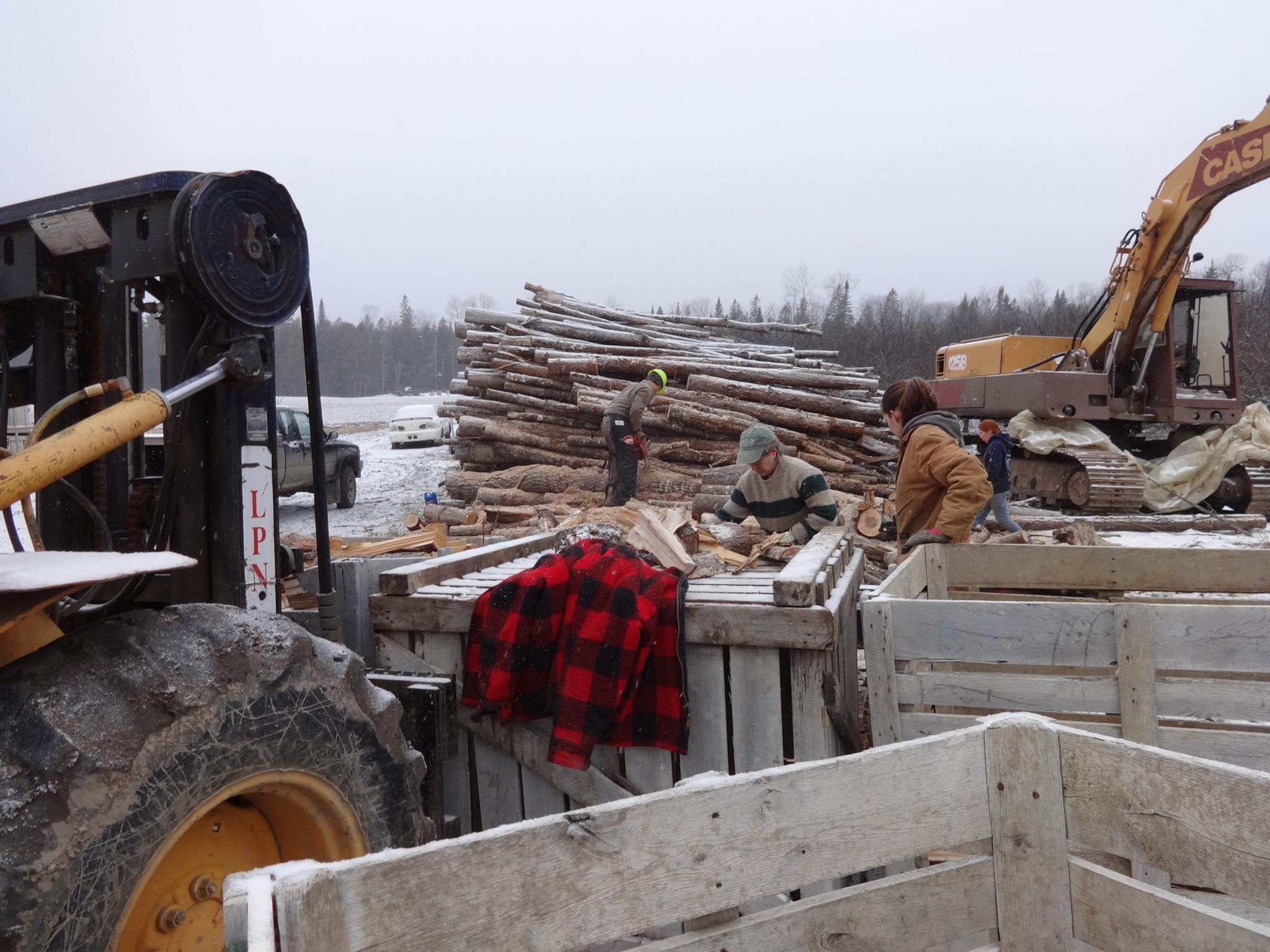 IMAGINE! FARMERS WHO ACTUALLY EAT SOME OF THE FOOD THEY GROW! Believe it! Our family farmer friends in New York state, Klaas & Mary-Howell Martens, grow a LOT of organic beans and grain – and organic cabbage! Like virtually all organic farmers, they do eat some of it as well. We know for a fact they grow their own potatoes because they have been loyal organic seed potato customers of ours for years. But, as Klaas notes, eating from one's own crops in today's modern ag is not as common as one would think. Read more! Jim

“'I really take issue with the line that so many American farmers regularly repeat about feeding the world,' says Marten, a third generation farmer working huge swathes of land near Penn Yan. 'I always want to ask Corn Belt farmers whether they, or anybody they know, have ever eaten anything that they grow on their farm. The answer is almost invariably no.'

"Yet this is the story we’re told by Big Agriculture – it’s the story we want to believe as consumers – about the farms in this country: they are the source of bountiful wagon loads of food that feed the world, and farmers are using the latest and greatest technology to make this happen.

"But, in the end, that’s just a story. It’s a series of happy caricatures we put on posters to encourage ourselves to stay calm and carry on. It’s anything but the truth." 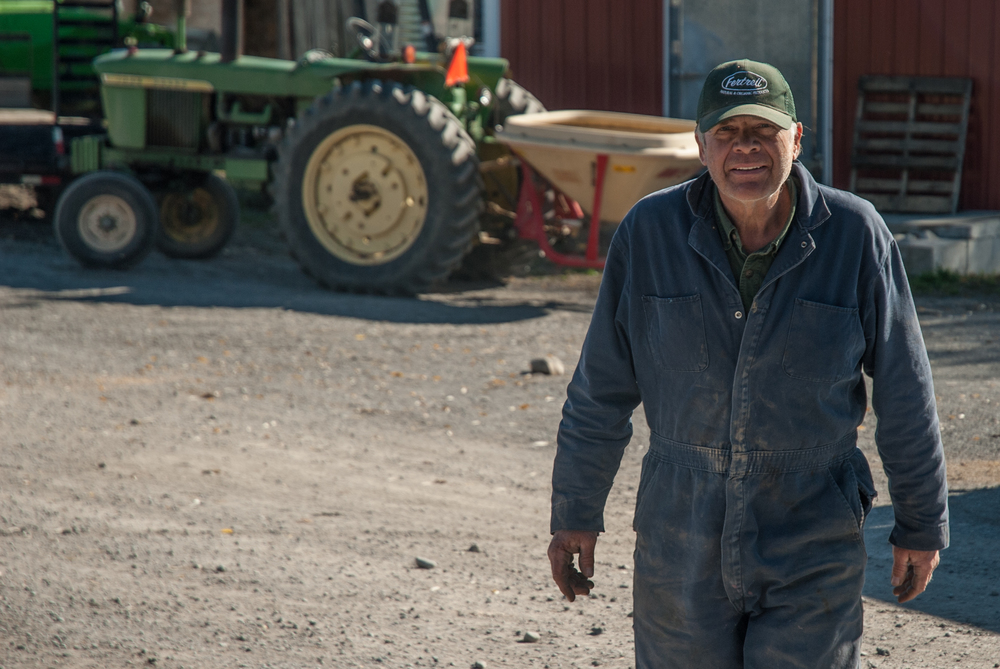 "Some of the greatest confusion involves food safety. For instance, the bill’s sponsor, Congressman Pompeo, declared that consumer demands for labeling of GE foods have nothing to do with health or safety, and its other supporters have backed that assertion and proclaimed that no legitimate food safety concerns exist… But this is flat-out false. For example, science-based concerns about the dangers to human health were repeatedly raised in memos written by the technical experts at the U.S. Food and Drug Administration (FDA) when they analyzed the risks of genetic engineering in 1991. The pervasiveness of the concerns within the scientific staff is attested by a memo from an FDA official who asserted: The processes of genetic engineering and traditional breeding are different, and according to the technical experts in the agency, they lead to different risks'…

"One of the strongest set of cautions appeared within an extensive report issued by the Royal Society of Canada, which declared (a) that it is 'scientifically unjustifiable' to presume that GE foods are safe and (b) that the 'default presumption' for every one of them should be that the genetic alteration has induced unintended and potentially harmful side effects…

"Laboratory testing has confirmed the legitimacy of the concerns, and a number of well-conducted research studies on GE foods published in peer-reviewed scientific journals have detected statistically significant instances of harm to the laboratory animals that were consigned to consume them. Moreover, a review of the scientific literature on GE foods (itself published in a peer-reviewed journal in 2009) concluded that 'most' of the safety assessments have not only indicated problems, but indicated that 'many GM [genetically modified] foods have some common toxic effects.'"

LIGHTNING OFFER! GET A FREE SACK OF HEIRLOOM ORGANIC FRENCH CHANTENAY CARROTS! BUT YOU MUST YOU ORDER TODAY! Receive a FREE 2-pound-sack of Organic French Chantenay Carrots (Value $12.95) on your next Wood Prairie Farm order totaling $10 or more. These Organic Chantenay Carrots are one of the crops we most enjoy growing on our farm in Maine. (https://www.woodprairie.com/produ…/…/fresh-organic-vegetables) Get ready to taste the difference!
Please use Promo Code WPF 436. FREE "Chantenay Carrot Offer" ends TONIGHT, TUESDAY December 30 at Midnight so PLEASE HURRY! FREE Chantenay Carrots will ship with your order.
Jim & Megan Gerritsen
Wood Prairie Farm
Bridgewater, Maine
(800)829-9765
www.woodprairie.com 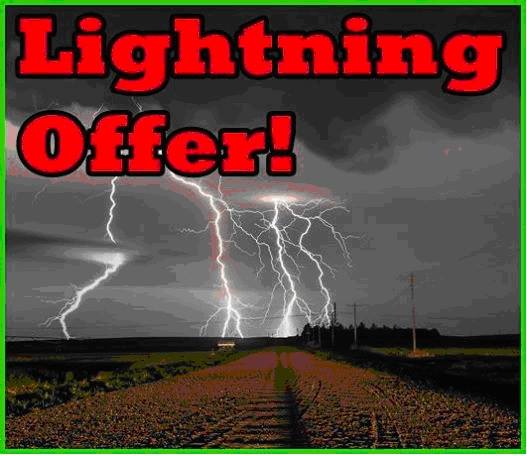 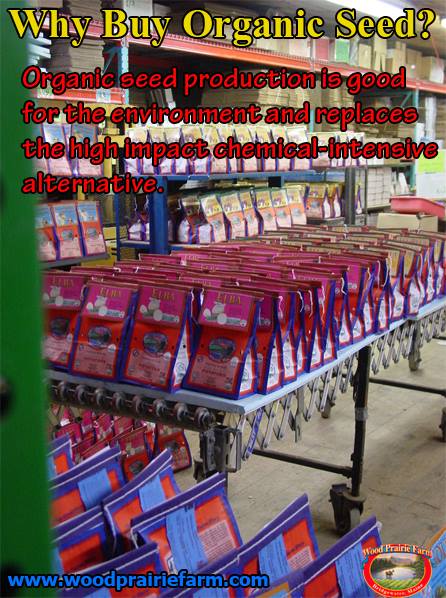