Another Milkyway shot from an Allagash River campsite last week. 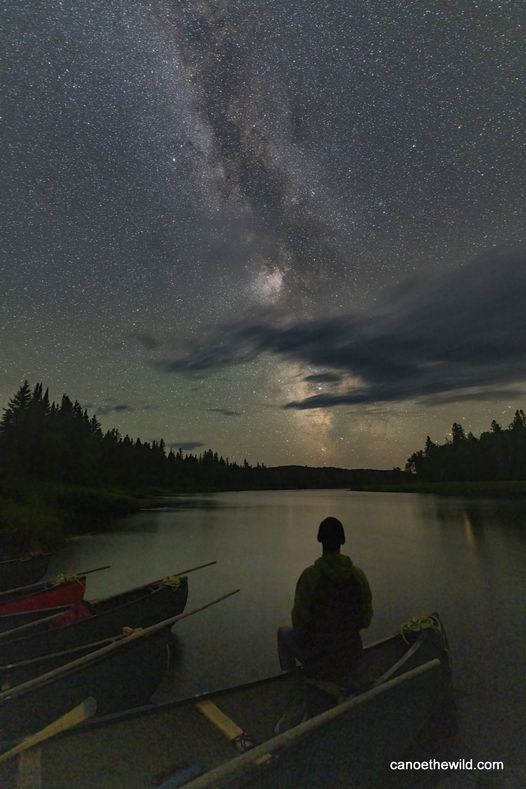 FALL HARVESTIME IN NORTHERN AROOSTOOK COUNTY, MAINE. Beautiful photo shared by Brenda Ketch, taken in the Town of Wallagrass, near Fort Kent.
The striking red field is traditional Tartary Buckwheat, grown by the Bouchard Family Farm. For generations the Bouchards have grown and milled the Buckwheat to make into the Acadian crepe-like flatbread known as Ployes (https://www.ployes.com/).
In recent years, our friend Joe Bouchard has made the plunge and has started growing organically. Caleb, Megan & Jim 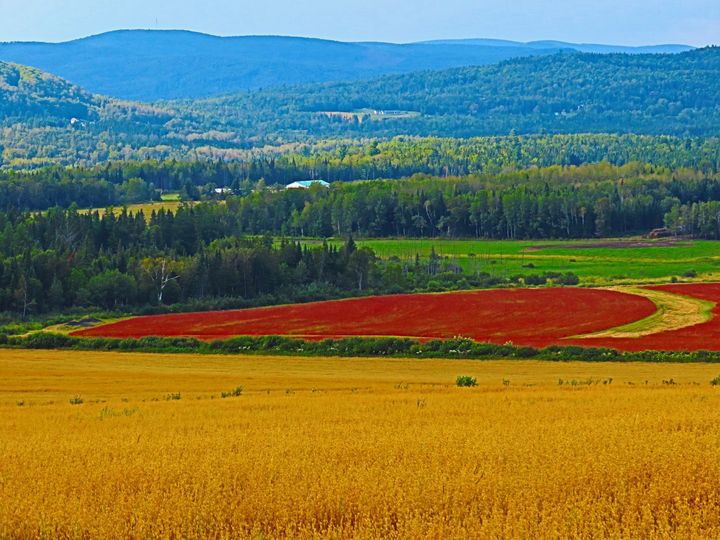 THIS WEEK IS THE O P P O S I T E OF GOOD COMBINING WEATHER. A good, hot day that is perfect for baling hay is also what’s needed for combining grain. Ideally, there would be a nice string of sunny and breezy days which takes down the grain’s moisture content to 13% to minimize the need for use of post-harvest grain dryers.
So far, this week has been overcast, high humidity and drizzly. The forecast promises a sunny stretch beginning this weekend and into next week. So, for now the Aroostook grain harvest waits.
This shot was was taken last week during better times. Caleb was driving our Massey 300 Grain Combine to harvest a crop of top notch Organic ‘Aroostook’ variety Winter Rye (https://www.woodprairie.com/product/rye-seed-organic-aroostook/). The field grew our Organic Seed Potatoes just last year. As soon as a plot was harvested it was planted immediately to Aroostook Winter Rye and undersown to three types of Clover plus Timothy Grass.
That 8″ of rain we had this Spring during planting may have been tough on Potatoes – drownouts – but it got the Clovers off to a great start!
The lovely Brown-Eyed Susan Flowers (aka ‘Rudbekia’ https://www.woodprairie.com/product/flower-seed-organic-rudbekia/) are volunteers from a perimeter planting of annual Beneficial Insect Flowers. Those Flowers helped nourish and sustain the Beneficials which helped keep in check harmful Insect pests aiming to feast on Potatoes. Caleb, Megan & Jim 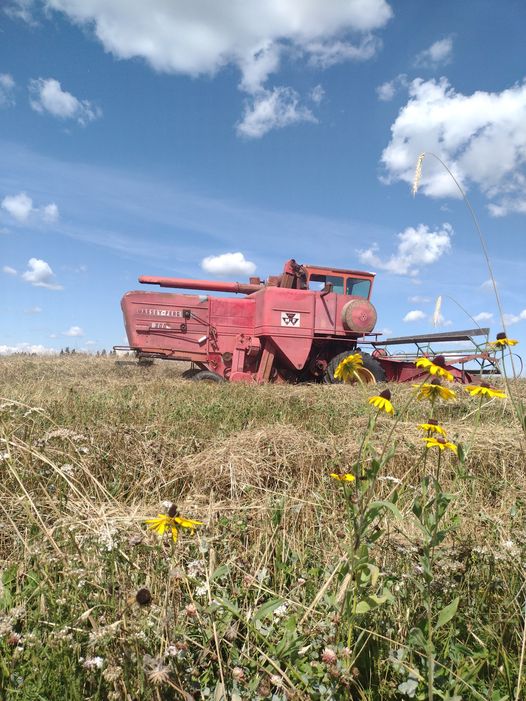 PUTTING UP LOOSE HAY. HOULTON, MAINE. Circa 1944. The best time to put away hay are afternoons that are hot and dry. Therein lies the legacy of haying as hard and itchy work. Colorized photo shared by Tom Rock.
If hay was to fed out to the farm’s horses and cattle, storing it loose through the Winter was fine. If hay was to be sold, say to Boston, a custom stationary ‘Hay Press’ would make the rounds in the Fall and marketable bales would be made from the loose hay. It takes 4x as much space to store loose hay as compared to baled. That fact explains the huge size of old barns.
Like virtually all Aroostook farms, this one grew Potatoes, so haying was no doubt a valuable and necessary sideline. The Potato House is built into the ground and is located behind the Elm tree.
A woodstove was connected to the chimney on the far side of the Potato House. During the coldest days of Winter a fire would be built to supplement the heat from the respiring Potatoes to keep them from freezing. Insulation was often sawdust. The flame from a candle would be used to identify the locations of pesky drafts which would then be plugged up.
Modern Aroostook Potato Houses with good insulation – and that have been sized properly and are filled to capacity with Potatoes – only on the coldest of Winter days will need supplemental heat. Caleb, Megan & Jim 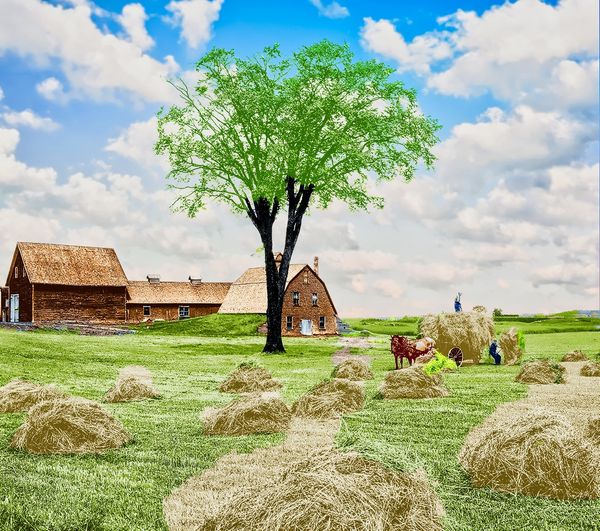 WHEN LUCK RUNS OUT: FARM BREAKDOWN BRINGS COMBINING TO A SCREECHING HALT. Early this week the forecast was calling for a ‘Summer Nor’easter’ to bring steady rain midweek to Maine. We prefer to harvest grain after a dry spell. When a dry stretch isn’t in the offing we like to finish up before a rain.
So, Caleb had successfully combined most of our Organic ‘Aroostook’ Winter Rye rotational crop (https://www.woodprairie.com/product/rye-seed-organic-aroostook/), about 10 acres’ worth. Then, with a just bit left to combine and rain on the way, a sophisticated cast iron bracket integral to the main drive belt pulley busted in two places.
Caleb was able to limp home to the Shop our ‘Massey Ferguson 300’ Combine. Working with Justin (at right in photo), the both of them assessed the damage and carefully removed the broken fixture. It’s a complicated and tricky job to weld cast iron. It takes special cast-iron-welding-rods plus the broken metal pieces must be ground and heated up just right with an acetylene torch in order for the weld to hold and be strong for the rough and tumble field conditions.
A specialized embedded bearing had to be ordered from Massey. That won’t be here until Tuesday. The forecast calls for a sunny weekend, but then more rain may be coming our way early next week. Northern Maine is shifting away from dry and is now trending towards wet. Caleb, Megan & Jim 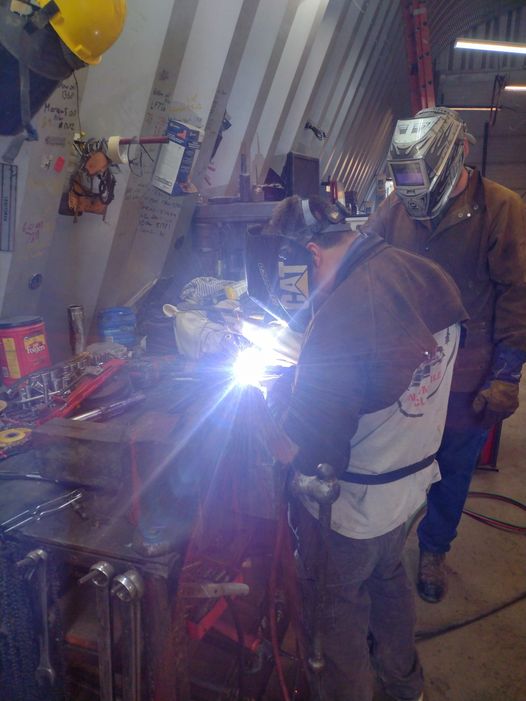 WHAT TEN-DAYS GROWTH LOOKS LIKE. Sunday – the day before last Monday’s big 1.75″ rain – we planted this Cover Crop Combo of Buckwheat (the larger light green leaves in a row) and Biofumigant Rapeseed (the scattered and much smaller, darker green seed leaves). Then yesterday, ten days later, Jim took this shot of growth achieved.
The much larger Organic Buckwheat (https://www.woodprairie.com/product/buckwheat-seed-organic-common/) Seeds sprouted quickly and emerged in six days. It takes the smaller Brassica Family-member Rape (seed size similar to Cabbage, Broccoli and Cauliflower) longer to emerge plus like most crops it is slower growing than Buckwheat.
The Buckwheat will continue with its rocket-like growth overshadowing the Rape until ‘Summer’ crop Buckwheat is cut down next month by our first frost. Then the frost-hardy-Rape will takeover dominance. It will grow until the cold weather of November, when heat units have run out, growth has ceased and when we’ll plow down the Cover Crop mat under, right before the ground freezes solid for the Winter.
In the last 24 hours we’ve had another 1.5″ of rain. With some 80oF days in the forecast ahead, growth will continue fast with all the water now in the soil. Caleb, Megan & Jim 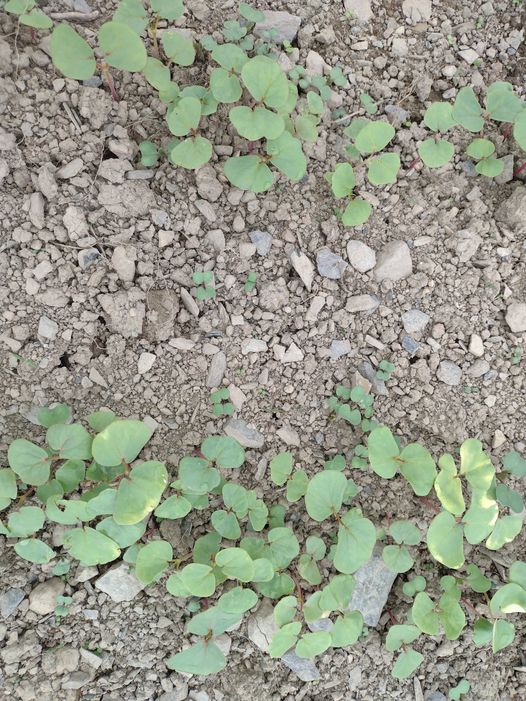 AMY DISCING ON WOOD PRAIRIE FAMILY FARM. Ahead of the Summer Nor’Easter arriving today around noontime, Caleb’s sister, Amy, was discing the last of next year’s Potato fields. Justin & Jim had spread barnyard manure on the fields, Caleb had plowed and now Amy is smoothing out the plow furrows with our 92 HP Oliver 1850 Diesel pulling a 15-foot wide John Deere “Tandem Disc Harrow” aka ‘Disc.’ By 8pm last night Jim had seeded the field to a combination of Buckwheat (https://www.woodprairie.com/product/buckwheat-seed-organic-common/) and Biofumigant Rapeseed cover crops.
This rich soil is 6-7% organic matter.
The Buckwheat and Rape we planted on other fields a week ago Sunday evening/Monday morning ahead of that last 1.75″ rain took 6 days to sprout and pop up through the soil.
Seeding just ahead of a rain gets a cover crop off to a fast start and disadvantages weeds. Caleb, Megan & Jim 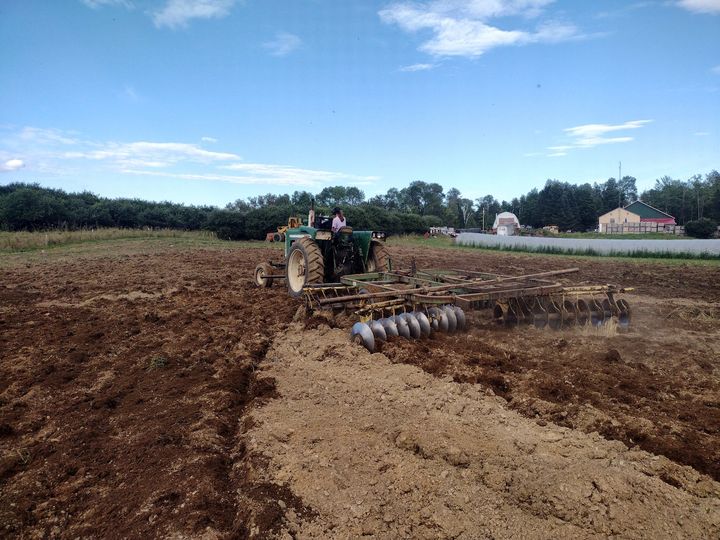 POTATO BARREL ROLLING CONTEST. PRESQUE ILSE, MAINE. Circa 1940. Rolling barrels figures into the “What Are You Doing on the Fourth?” ‘Maine Tales’ in the New issue of our ‘Wood Prairie Seed Piece.’ Here’s an excerpt. Caleb, Megan & Jim https://www.woodprairie.com/newsletters/081222.html#Article_1

“…Now, the first European-American settler to land in this locale was Nathanial Bradstreet in 1827. Along with his sons John and Joseph, he left the safety and civilization of the central Maine Town of Palermo to search for a streamside mill site to start and whittle down the forested wilderness which in time would become the Town of Bridgewater. Once the trees were removed the forest was soon converted over to farm fields in which to grow mighty potatoes. Jump down about four generations and you come to Bridgewater Seed Potato farmer Dan Bradstreet (1912-2006), grandfather to our friend, contemporary Seed Potato farmer, Ryan Bradstreet.

“Jim worked for Dan in his Potato House the Winter of 1976-1977. There had been a devastating drought in Europe the Summer of ’76. The demand for the export of Maine Certified Seed Potatoes to the Old World was strong. In addition to hanging 50-pound paper sacks for domestic trade, they’d fill and lug 50-kg burlap bags (110-pounds) into rail cars bound for Winterport, where sacks were reloaded onto boats headed to Europe.

“The young men hung (filled), weighed and sewed the bags shut. Dan and a couple of older helpers graded out Potato culls on the inspection table portion of the grading line. Dan’s son, Wayne, kept the hopper full with a mechanized Potato shoveler and made sure the line was flowing well. Whenever Potato varieties had to be switched – and at the end of the day – it was time to clean up the floor of spilled and crushed potatoes and dirt. They’d also roll 11-peck Cedar Potato barrels full of ‘Seconds’ (smaller B-sized potatoes) separated out by a mechanical sizer to an awaiting bin. Some of the men were so talented at rolling barrels full of 165-pounds of potatoes that they did it effortlessly with one hand while walking beside the barrel. They could also skillfully and efficiently roll a full barrel up a single 12-foot 3”x 8” plank to a height of three or four feet, to allow the barrel to be emptied into an awaiting bin…” 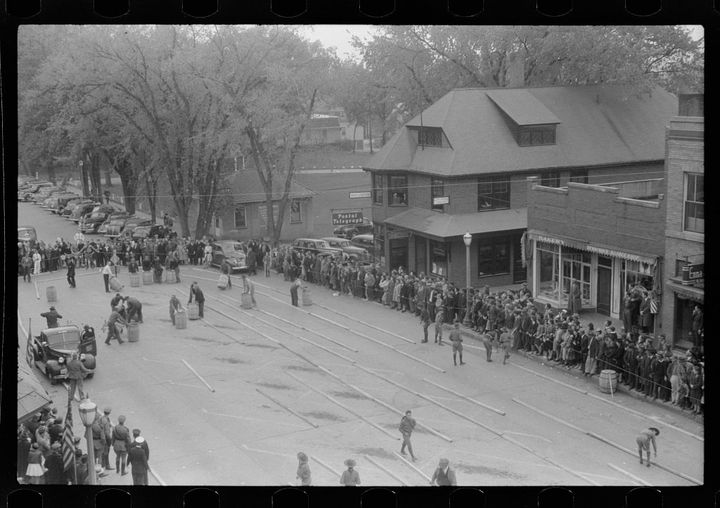