SNOW CLOSES SCHOOLS ACROSS NORTHERN MAINE. Yesterday we had our first major Winter storm and it resulted in schools being closed in Northern Maine. With school closed we had extra help to grade potatoes.
Wood Prairie Family Farm received 4" of snow followed by 3/4" of heavy dense sleet before it turned back to snow. Because of recent cold the ground was frozen over as the snow began to fall. This morning we had +12oF.
Megan went cross-country skiing yesterday and took this shot of our Big Pond, starting to freezing over. Caleb, Megan & Jim 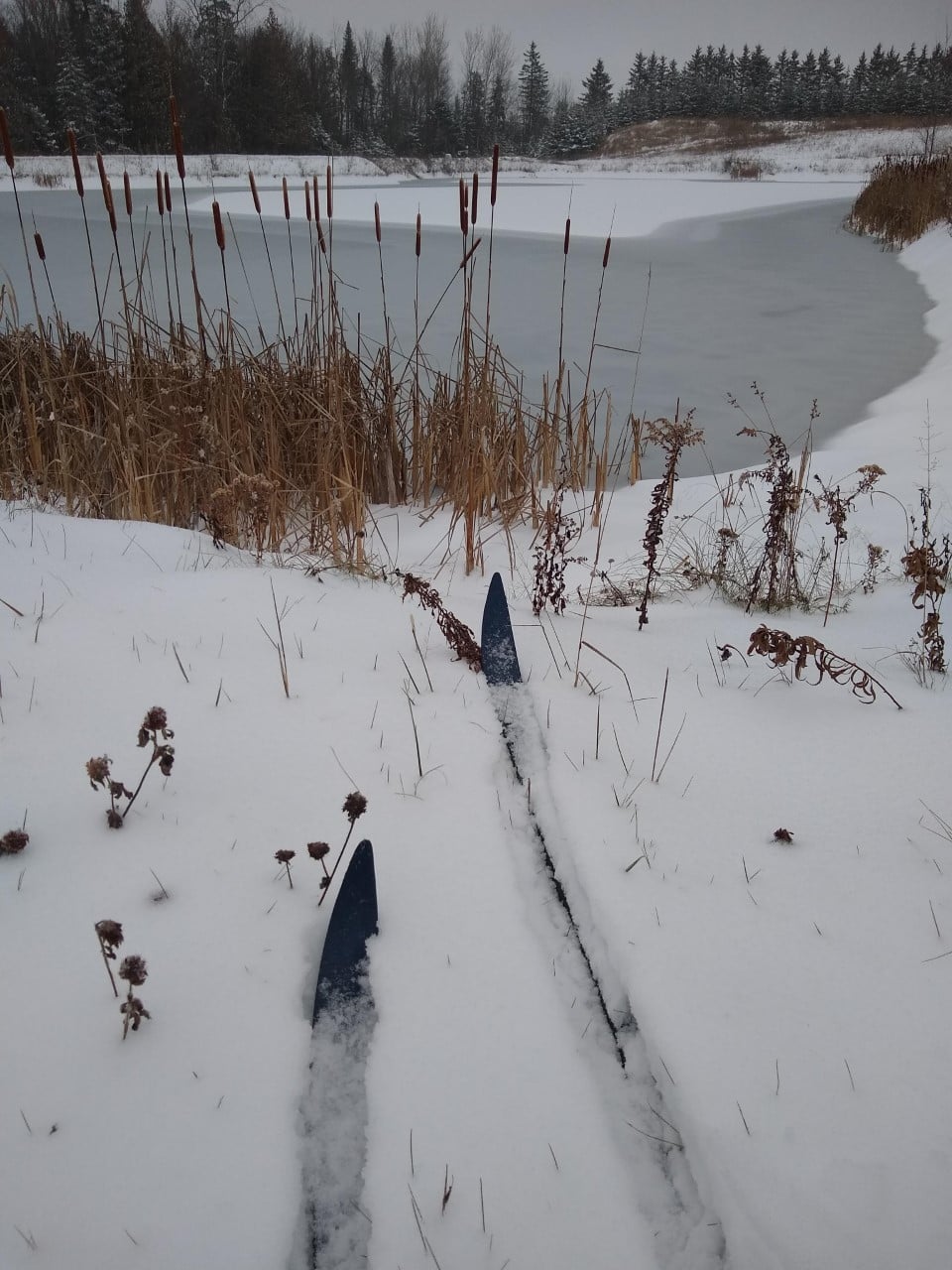 CATCHING UP WITH THE WORLD'S 'HAPPIEST' COUNTRIES. Yes, the Scandinavian countries continue to lead the pack and Finland is again on top. USA comes in at #19 and our neighbor Canada is #9.
What pushed the Finns to the top? "Generosity" and the good feeling one gets from being generous. Caleb, Megan & Jim

Why are Scandinavians the happiest people on earth? As the Nordic nations again top the world happiness league, what's the secret to their success?

COMING & GOING ON MAINE'S WOOD PRAIRIE FAMILY FARM. Recently Plowing Down Biofumigant (https://www.woodprairie.com/produ…/…/organic-cover-crop-seed) Rapeseed Cover Crop Ahead of Snow.
Jim (right) drives an Oliver 1650 Diesel tractor pulling a 7-foot Woods Bushhog, chopping the 90-day old Rapeseed cover crop.
Following a few laps behind, Caleb is on our Oliver 1750 Diesel hitched to a 7-tooth International Harvester Chisel Plow which rips a foot-deep into the soil, turning in the green matter on top of the soil.
In a practice called "Biofumigation" – increasingly common on Organic Farms – " 'Brassica' (Cabbage) family crops when decomposing cleanse the soil reducing pathogenic nematodes, funguses and weed seeds.
Next Spring this field will be planted to a crop of Organic Maine Certified Seed Potatoes (https://www.woodprairie.com/…/certified-organic-seed-potato…). Our fields here in Northern Maine are now frozen over and covered with snow. Caleb, Megan & Jim 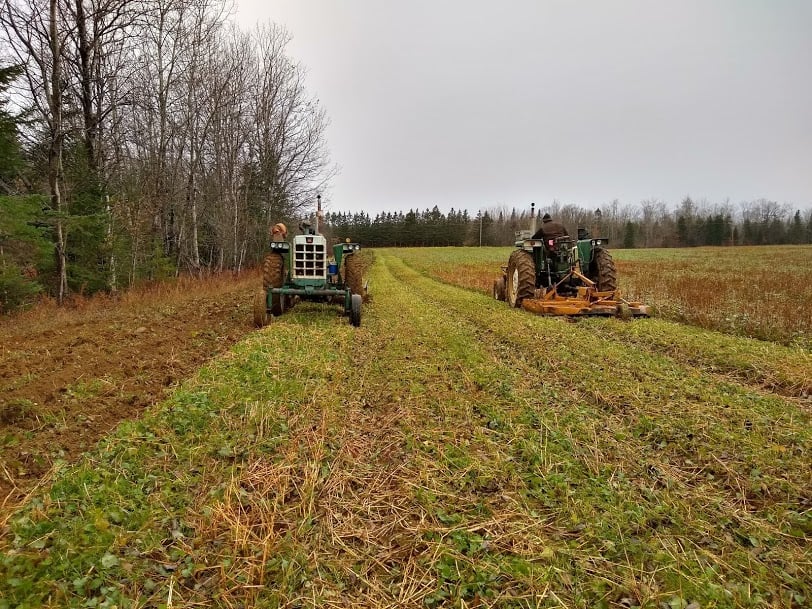 'CONSUMER REPORTS' WEIGHS IN ON THE BIG POTATO QUESTION: ARE THEY GOOD FOR YOU? In recent decades a lot of opinions have been traded about the food value of the lowly potato.
In its customary manner, ultimate arbiter 'Consumer Reports' provides an upbeat analysis.
And when eating potatoes, the smart option – for the health of your family and that of the planet – is to reach for Certified Organic Potatoes, the less processed the better. Caleb, Megan & Jim https://www.woodprairie.com/category/the-organic-kitchen

"They’ve been maligned in nutrition circles for decades, with links to obesity, type 2 diabetes, and cardiovascular disease. But they’re also highly satisfying and provide many essential nutrients.

"So are potatoes good for you or not?

“'Potatoes have gotten a bad rap because of the way they’ve been eaten and processed in the modern food system,' says Charles Mueller, Ph.D., a clinical associate professor in the Department of Nutrition and Food Studies at New York University.

"Undoctored potatoes are healthy, says Mueller: They supply a good mix of nutrients. It’s when people deep-fry them in oil or smother them in butter, sour cream, or salt that spuds turn into nutritional duds…

"…'It’s always good to eat potatoes with the skin,” says Mueller, “because you pick up some fiber'…

"In addition to white potatoes, you can find yellow, purple, and red-fleshed varieties. The colors come from compounds in the plants called phytochemicals such as anthocyanins, carotenoids, and flavonoids, which have antioxidant properties and may protect against cardiovascular disease, cancer, and other chronic diseases. Red- and purple-fleshed potatoes have nearly twice the flavonoids as white ones." 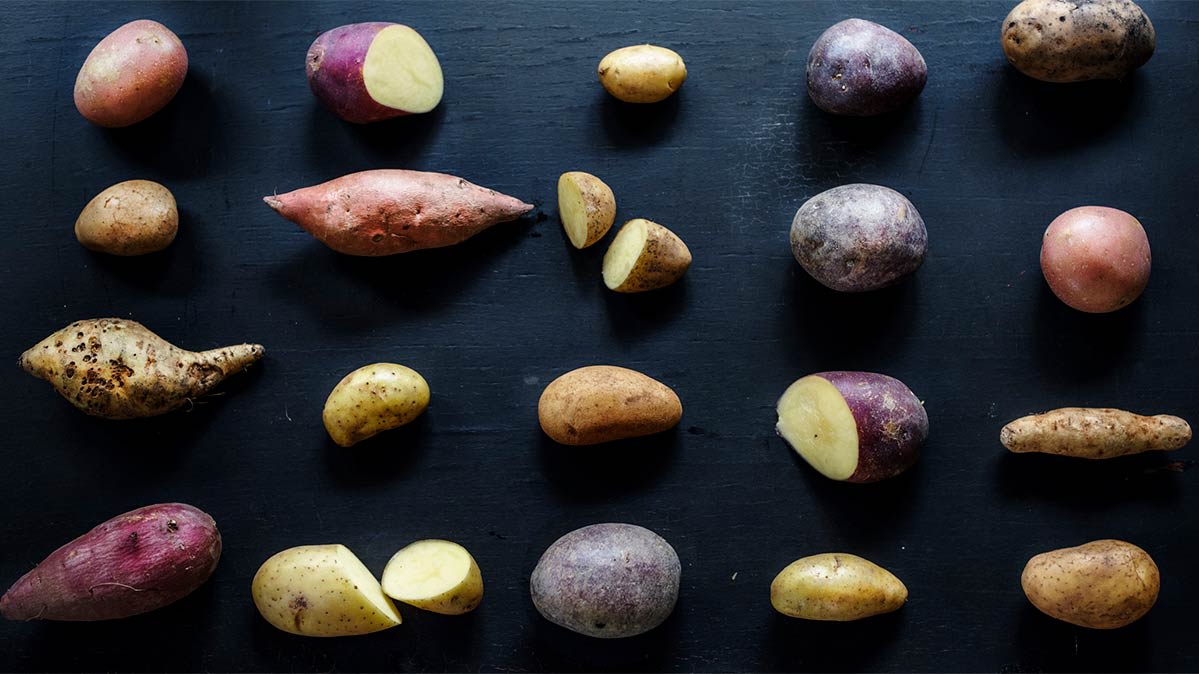 Are Potatoes Good for You?

They've been maligned in nutrition circles for decades, but are potatoes good for you? Consumer Reports has the answer.

RAIN & COLD FORCES MANITOBA TO ABANDON THOUSANDS OF ACRES OF UN-DUG POTATOES. For the second year in a row, hard-pressed potato farmers in the Canadian Province of Manitoba (north of North Dakota) have been forced by bad weather to abandon sizable acreages of potatoes.
Last year 5200 acres couldn't be dug. This year, abandoned acreage appears to be twice that level, representing about 20-25% of the crop.
Process potatoes are taking the biggest hit. Jim

"He told the meeting about 70 per cent of the potato crop was harvested, leaving an estimated 15,000 acres unharvested. More potatoes were harvested from Oct. 25 to Oct. 27, resulting in his revised 12,000-acre estimate, which will be further revised as additional reports come in.

"By Oct. 31 an estimated 75 per cent of the crop was off. Freezing temperatures around Carberry Oct. 23 damaged potatoes in that area, Sawatzky said.

"Potato harvesting across the province ceased after cold temperature started late Oct. 27, and continued for several more days, he added. Almost all seed and table potatoes were harvested.

"Farmers are expecting storage problems this year, due to moisture stress… 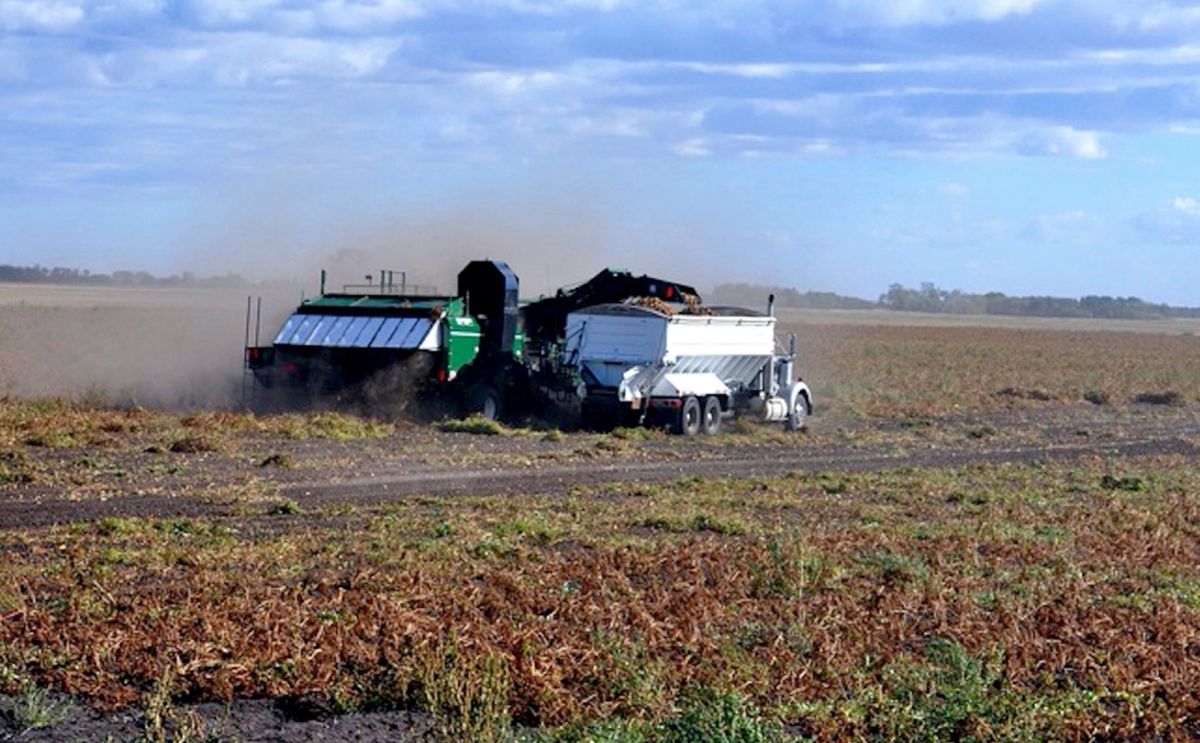 ORGANIC KEUKA GOLD ADDED TO WOOD PRAIRIE LINE UP! 'Keuka Gold' is a wonderful potato bred at Cornell University. It is good-tasting and easy to grow in the garden.
We just finished harvest a beautiful crop of Organic Keuka Gold Certified Seed Potatoes.
We also sell Organic Keuka Gold Kitchen Potatoes which you may immediately prepare for your family's Thanksgiving Dinner (https://www.woodprairie.com/product/1341/the-organic-kitchen).
Order now while supplies are at their best and we can ship right to your door whenever your want your them! Caleb, Megan & Jim 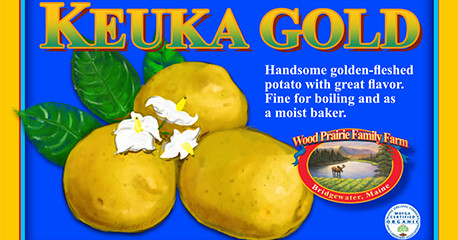 NEW STUDY FINGERS 'NEONICS' FOR COLLAPSE OF JAPANESE FISHERIES. In new peer-reviewed research, scientists have been extraordinarily direct in their conclusions that deadly systemic Neonicitinoid insecticides are responsible for the precipitous collapse of fisheries in Japan.
'Neonics' are extensively used in conventional American Ag. As a systemic, Neonics are designed to translocate their toxicity to all portions of the plant. In the case of conventional potatoes, yes, this means the Neonic toxin is translocated to the edible tuber.
Of course, Certified Organic farmers never, ever use synthetic, persistent toxins such as Neonics in their production of organic crops. The bottom line is Organic production is good for your family and good for the planet. Caleb, Megan & Jim

"The researchers looked at the degradation of the food chain around rice paddies after the introduction of the pesticide neonicotinoids in 1993 in Japan. The study showed an immediate decline in insect and plankton populations in Lake Shinji after the pesticide was sprayed in nearby rice fields, as The Guardian reported…

"The researchers noted that Rachel Carson's book was prophetic. In their paper, The Guardian reported, the Japanese researchers said how 'she wrote: 'These sprays, dusts and aerosols are now applied almost universally to farms, gardens, forests and homes – nonselective chemicals that have the power to kill every insect, the 'good' and the 'bad', to still the song of birds and the leaping of fish in the streams.' The ecological and economic impact of neonicotinoids on the inland waters of Japan confirms Carson's prophecy.'

"'This disruption likely also occurs elsewhere, as neonicotinoids are currently the most widely used class of insecticides globally,' worth more than $3 billion per year, they said, as The Guardian reported.

"The German company Bayer is the world's largest producer of neonicotinoids." 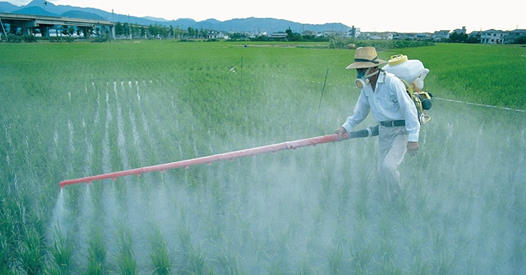 Scientists announced today that pesticide use on rice fields led to the collapse of a nearby fishery in Lake Shinji, Japan, according to a new study published in the journal Science.

PLANTING ORGANIC WINTER RYE ON MAINE'S WOOD PRAIRIE FAMILY FARM. Last month, as soon as we finished harvesting our 2019 crop of Organic Maine Certified Seed Potatoes (https://www.woodprairie.com/…/certified-organic-seed-potato…), Caleb & Jim used our collection of farm equipment to remove rocks, chisel plow and then harrow smooth the ground.
Immediately after, we planted an Organic Seed crop of legendary soil-saving cover crop Winter Rye (https://www.woodprairie.com/…/organ…/organic-cover-crop-seed).
Here, Jim is driving our 1967 Oliver 1750 Diesel pulling a ten-foot-wide International 510 Grain Drill and rubber-tired farm-fabricated Land Roller. The Roller firms the top two inches of soil, improving seed contact with the soil thereby aiding germination. The Grain Drill meters out 110 pounds of Rye seed per acre, which planter discs deliver two-inches deep into the soil via flexible metal tubes spaced 7" apart.
Simultaneously, using an integrated but separate "Grass Box," the Grain Drill also dispenses a special mix of tiny Organic Clover & Grass seed in order to establish a nitrogen-fixing, carbon-sequestering undersown sod crop.
The Wintery Rye will be ripe for harvest next July. The Clover and Timothy Grass will form a dense sod, provide years of hay and pasture, and steadily build-up the soil until this year's fields are rotated back into Organic Seed Potatoes in 2023.
As is common on good organic farms, we have taken the time to carefully refine and develop our long, sod-centric 4-Year Crop Rotation. We have been following it now for over 30 years. Caleb, Megan & Jim 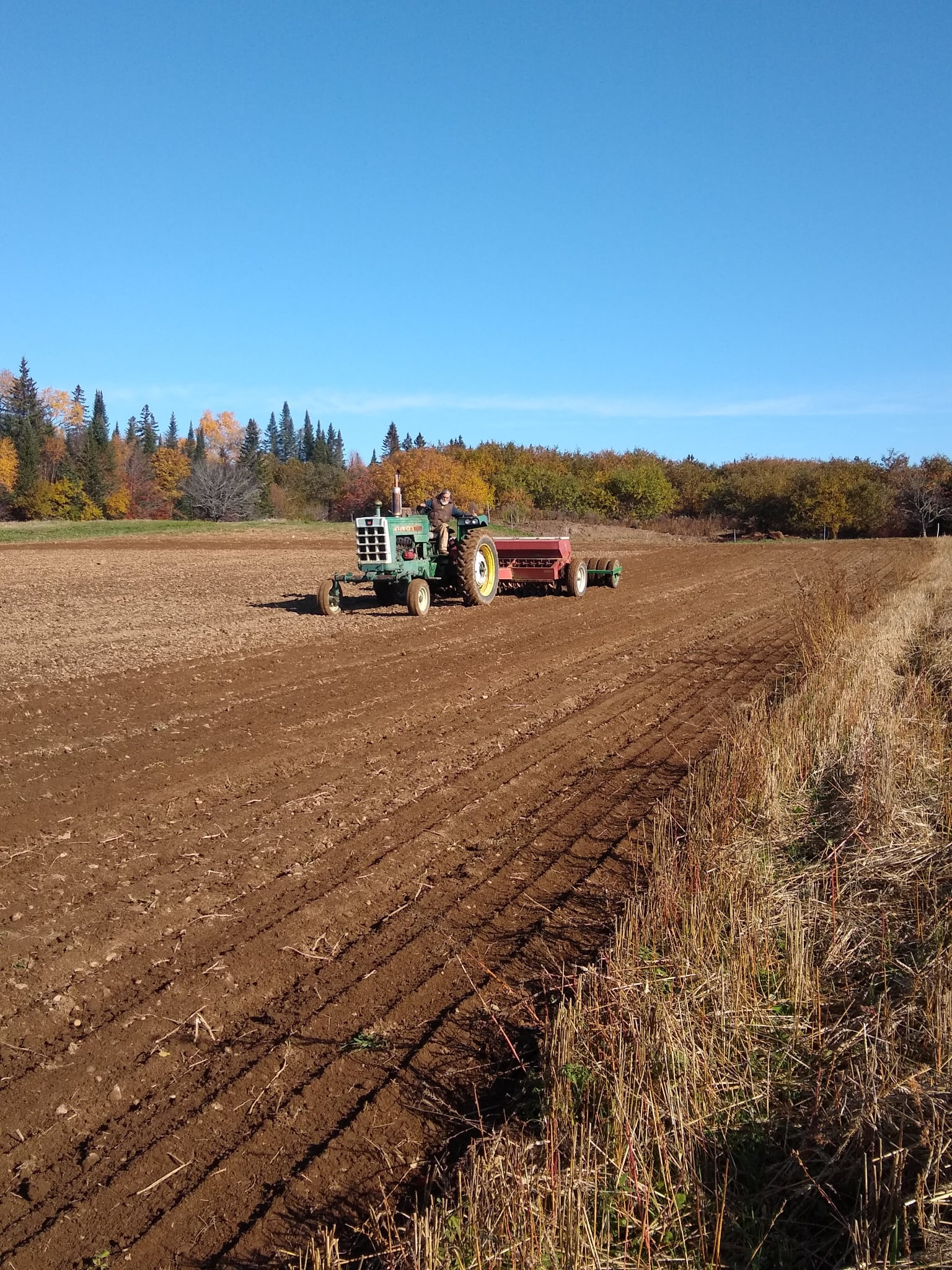 A GLIMPSE INTO DOWNEAST MAINE'S STRUGGLING 'WILD BLUEBERRY' BUSINESS. "Low-bush" Blueberries have been growing effortlessly on the "Barrens" of Downeast Maine for thousands of years, ever since the last retreat of glaciers.
And for over one hundred years, there has been good money to be made by everyone involved in the "Raking" and selling of Maine's iconic wild Blueberries. In fact, Blueberries have been an important source of income in a chronically economically-distressed corner of Maine.
Seismic shifts have been underway in recent years which threaten the foundation of Maine's Blueberry industry. As is common amidst an out-of-balance modern agriculture, it is the smaller family operations – most critical to community health and economic vitality – which are most at risk and experiencing injustice.
As a bonus, you'll enjoy the beautiful Harvest photos which accompany this Huff Post article. Caleb, Megan & Jim

"Growing wild in the fields of the Wabanaki and Penobscot tribal nations in Washington County, Maine, wild blueberries have become synonymous with the state. And these small berries represent not only a symbol of Maine’s identity, but also larger metaphors of identity and changing populations in the United States today…

"…Allen explained to me that he and most other independent growers must pay for labor, equipment and all the upfront costs associated with raking blueberries for the short harvest in the month of August. After processing and selling, the larger corporations that sit on the Maine blueberry council decide the market price for the year. Many farmers often won’t receive a check for the crop until the end of November.

"And last year, Hammond ended up in a $20,000 deficit. Seeing deficits and hardship as the price of the berry fluctuates, he and others have begun to push for change…

"The industry to harvest wild, low bush Maine blueberries is like the fruit itself: precarious and on the cusp of change. Blueberries have driven Maine’s easternmost region’s economy, and literally built a frozen fruit empire. Unlike the larger, high bush blueberries we are familiar with at the grocery store, in their clear, plastic clamshell boxes, low bush, wild blueberries are sweeter and smaller with higher levels of antioxidants.

"Maine blueberries have always been a money-making crop but in 2016, after years of producing hundreds of millions of pounds of blueberries, the market price dropped as Canadian berries flooded the market. Then a few years of drought and frost, plus an aging population in rural Maine had many questioning the stability of the blueberry industry for independent growers.

"This means that the stream of seasonal workers will also have to adapt. For decades now, workers of all kinds and from all walks of life have come here to rake blueberries…

"There is one glimmering hope in what appears to be an industry gone to the wayside: the migrant families that have settled in Washington County." 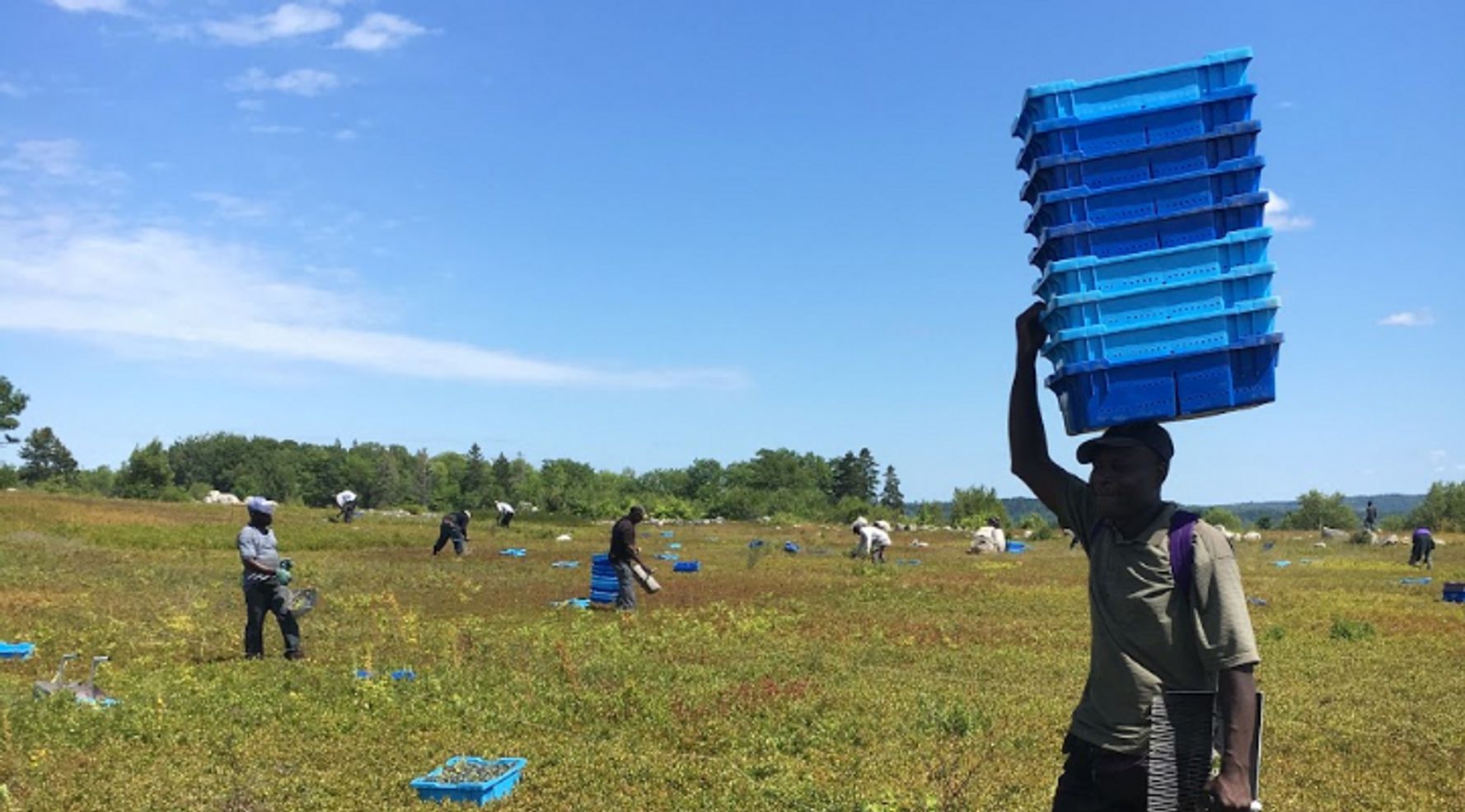 Chasing Blueberries: The Uncertainty Of Life As A Maine Berry Picker

Migrant workers face a number of challenges as the industry turns to mechanization and faces fluctuating weather patterns.