NEW ZEALAND 'BUSH SCHOOL' CUT FROM A DIFFERENT CLOTH. "The Deep Green Bush School" is an unconventional 'nature-immersion' school – without tests or homework – and uses nature to teach its life and survival skills to students. Another update from last year (https://www.stuff.co.nz/…/education-review-office-gives-the…) indicates the school has achieved credentialing which says a lot about both New Zealand and the school. Jim

"Woodworking, planting, flax weaving, hunting and preparing food and tending to chickens, ducks, bees and other animals is all part of the curriculum.

"Co-founder and teacher Joey Moncarz​ says being 'gadget free', apart from a few computers for study, is one of the few rules…

"The initiative used the same ideas to learning but was available mostly to home-schooled students. The bush school is taking it one step further.

"It's all about a 'rewilding' philosophy, he says…

"The goal is to teach kids about sustainability in the face of environmental and social challenges such as 'ecological devastation' and 'the death-trap of debt', he says." 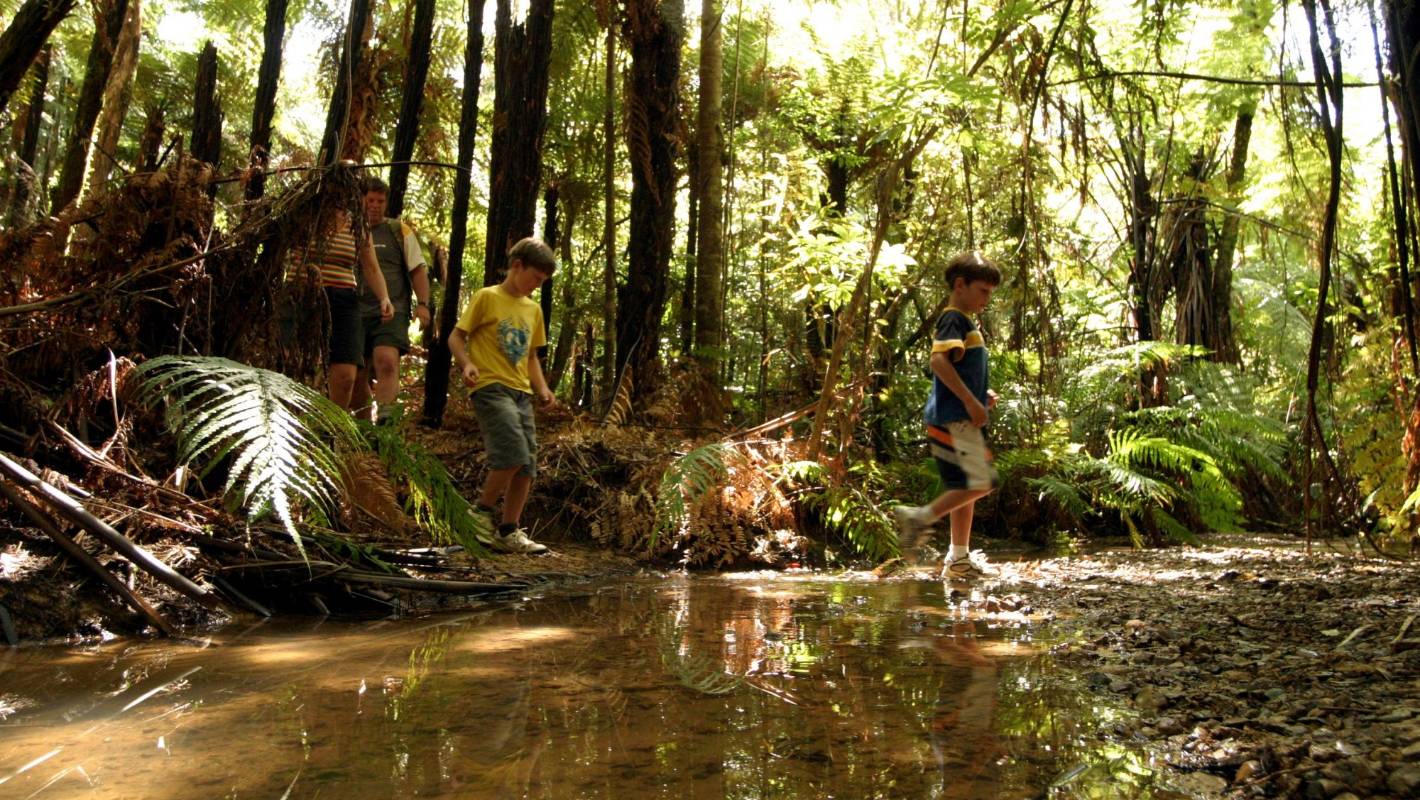 Into the wild: No tests or homework as school goes bush

No tests, no homework and getting back to nature are aspects to New Zealand's first 'bush' school set to open next year.

"JOHN BUNKER'S APPLE PIE." Supplementing yesterday's post about Apple Explorers in Washington is this enjoyable article & beautiful video (6:23) produced on the 'Kitchen Vignette' blog by talented filmmaker Aube Giroux (Aube's award-winning film 'Modified' just had its digital release: https://www.modifiedthefilm.com/…).
Our friend, John, is the grandfather of Apple Exploring detective work. He began his journeys to the far-flung corners of Maine – including Aroostook County and Wood Prairie Family Farm – for rare heirloom apple trees four decades ago.
John's recipe for apple pie is included and its his opinion that the best Apple Pie is made from no less than three 'Pie' varieties of Apples. His two books on Apples are available from him at his Super Chilly Farm in Palermo or from Fedco Seeds (https://www.fedcoseeds.com/trees/books). Caleb, Megan & Jim 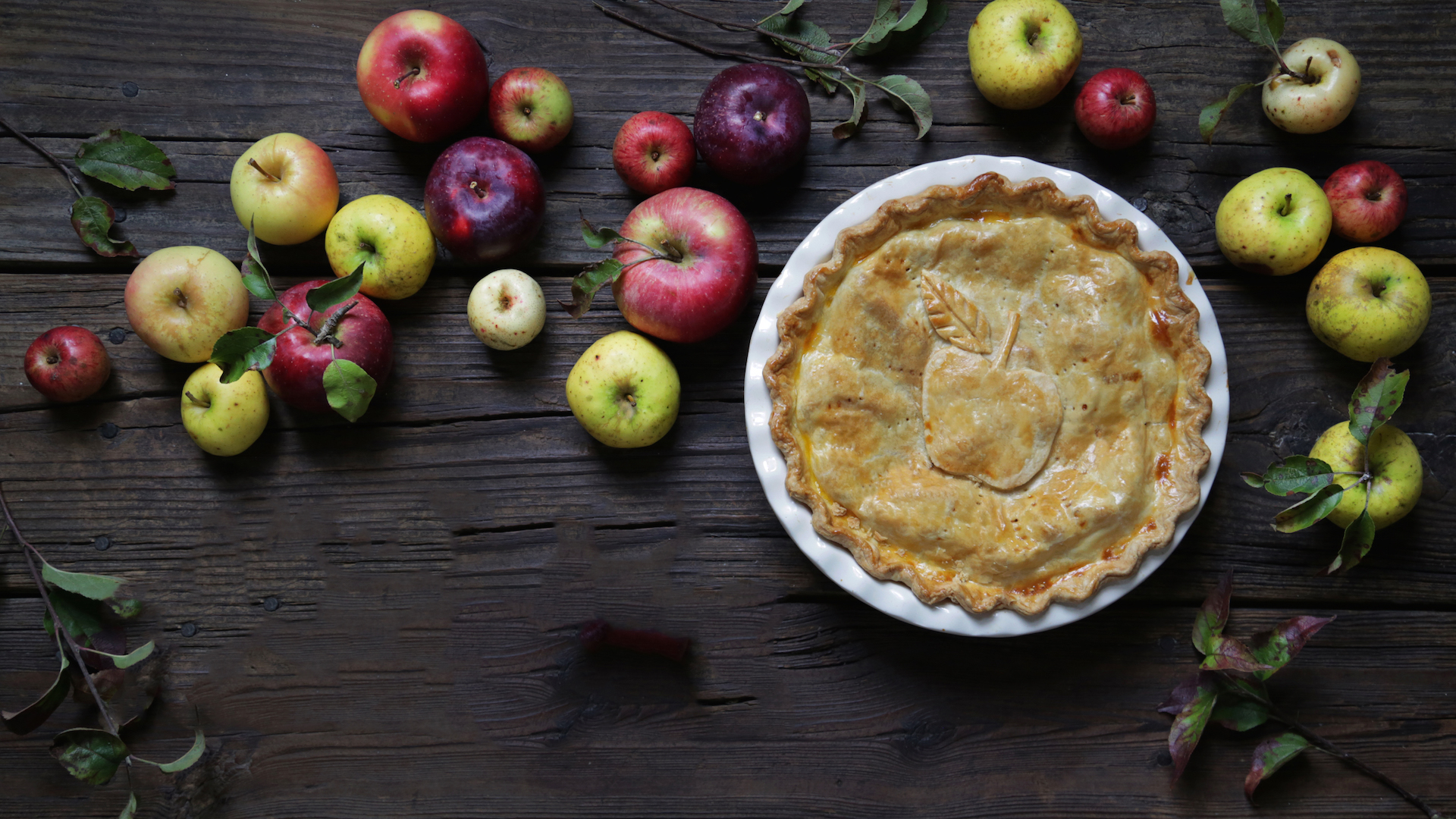 The first time I met John Bunker was at the Common Ground Country Fair in Maine. He was standing in the middle of a large, captivated audience, speaking passionately about apples and passing around trays filled with apple slices for everyone to sample. But these were not just any apples. They were a…

THE CLOCK TICKS AS THE SEARCH FOR RARE HEIRLOOM APPLE TREES GROWS. 'The Lost Apple Project' is a labor of love centered around Pullman, Washington, by amateur botanists David Benscoter and E.J. Brandt. In a team effort they are searching for lost specimens of rare heirloom apples before they are lost to factors like age and weather. 'The Seattle Times' reports.
This Washington regional apple treasure hunting mimics the similar decades-long heirloom apple/fruit exploration work of our friends John Bunker in Maine and Amigo Bob in California. Caleb, Megan & Jim

"It has been there for more than a century, and there is no hint that the tree or its apples are anything out of the ordinary. But this scraggly specimen produces the Arkansas Beauty, a so-called heritage fruit long believed to be extinct until amateur botanists in the Pacific Northwest tracked it down three years ago.

"It’s one of 13 long-lost apple varieties rediscovered by a pair of retirees in the remote canyons, wind-swept fields and hidden ravines of what was once the Oregon Territory…

"The task is huge. North America once had 17,000 named varieties of domesticated apples, but only about 4,000 remain. The Lost Apple Project believes settlers planted a few hundred varieties in their corner of the Pacific Northwest alone…

"Apples from newly discovered trees are placed in a Ziploc baggie and carefully labeled with the tree’s latitude and longitude and the date the fruit was collected. The apples are then shipped to the Temperate Orchard Conservancy more than 400 miles (640 kilometers) away in Molalla, Oregon, for identification.

"There, experts work to identify them using a trove of U.S. Agriculture Department watercolors and old textbooks. Once a variety is identified as “lost,” the apple detectives return to the field to take cuttings that can be grafted onto root stock and planted in the conservancy’s vast orchard, to be preserved for future generations." 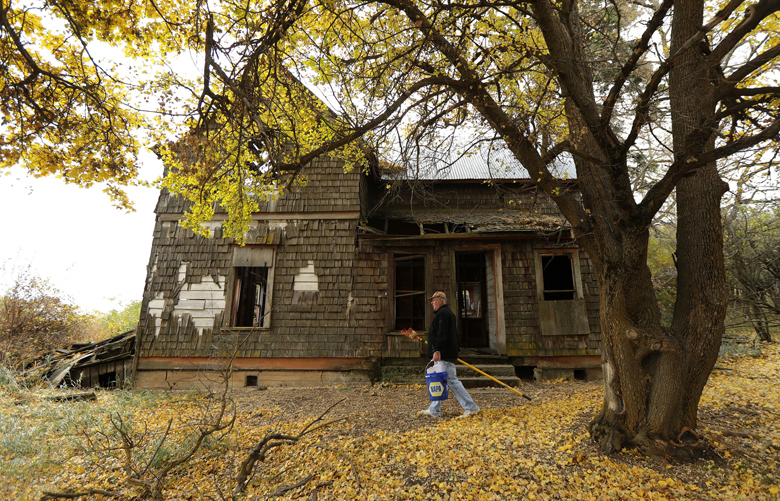 The two botanists with the nonprofit Lost Apple Project scour county fair records, newspaper clippings and nursery sales ledgers to figure out which varieties existed in the area. The task is huge. North America once had 17,000 named varieties of…

HOW FAMILIES EAT IN THE ARCTIC: FROM AN $18 BOX OF COOKIES TO POLAR BEAR STEW. Very worthwhile new article from NPR about food traditions in the Arctic. Supplemented by a powerful array of insightful photographs by Acacia Johnson – including clear captions.
You won't want to miss this one! Caleb, Megan & Jim

"In the most northerly Canadian territory of Nunavut, grocery shopping is expensive…

"Leesee Papatsie, founder of the Facebook group, says she spends at least $500 a week on food for her family of five — and that's just for basics in the capital of Iqaluit, a city of some 7,000 residents.

"Because it costs a lot to fly goods into communities in remote regions of the Arctic Archipelago, there's not much that can be done to drastically reduce prices, she explains. But that's why — in a territory where about 84% of the population identifies as Inuit — 'country food' is still the preferred source of sustenance.

"These traditional Inuit foods include arctic char, seal, polar bear and caribou — often consumed raw, frozen or dried. The foods, which are native to the region, are packed with the vitamins and nutrients people need to stay nourished in the harsh winter conditions. The parts of the animal that aren't edible, like the fur and skins, are used to create clothes and other products that hunters can then sell to make a living…

"Acacia Johnson, an Alaskan photographer, spent several seasons documenting these customs in Arctic Bay on the northern tip of Baffin Island, where the population is around 750."

“THE POTATO HARVEST.” Thomas James Lloyd. Circa 1882. Watercolor by the British artist (1849-1910), signed as “TomLloyd 1882.” This work is now considered to be in the public domain, with the copyright term having expired one hundred years after Mr. Lloyd’s death.
Happy Thanksgiving. Caleb, Megan & Jim

RARE OPPORTUNITY: WHAT WOULD YOU DO WITH THIS "SPECTACULAR" 530-ACRE SEQUOIA GROVE? It's not often that a mixed old-growth Sequoia Grove, located on the western slopes of the southern Sierra Nevada, comes up for sale. Meeting a cool $15.6 Million (that's just under $30,000/acre) price tag would seal the deal .
The grove known as "Alder Creek" contains massive Sequoia trees, including the world’s fifth largest, known as the 'Stagg Tree'.
If the Save-the Redwoods-Leagues gets it way – and succeeds in raising funds – it will make the purchase and then add the grove to Giant Sequoia National Monument.
Donations are being collected until a Dec 31 deadline if you would like to help. Caleb, Megan & Jim https://www.savetheredwoods.org/…/save-the-redwoods-league…/ 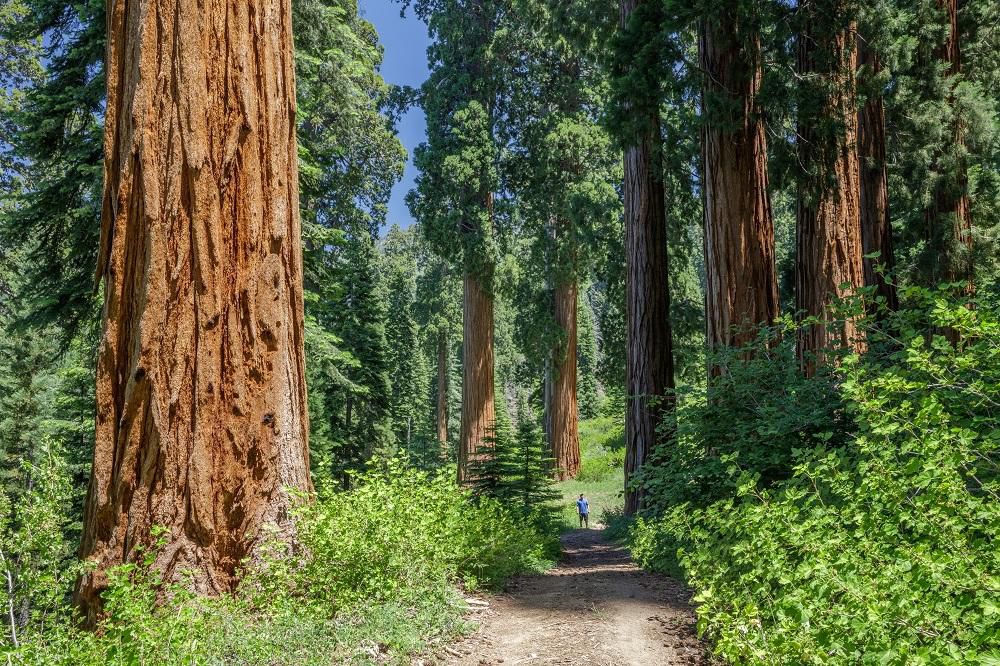 MORE GOOD NEWS: INDEPENDENT BOOKSTORES NOW BOUNCING BACK. Back before becoming the monolith it is today, Amazon started out narrowly focused on books. That fact conspired to crush independent book retailers.
Now, independent bookstores are supplying proof of the power of the Shop Local Movement.
It turns out, where we spend our dollars DOES make a difference to our communities, to society and to the economy. Caleb, Megan & Jim

"A growing number of shoppers will be supporting their independent neighborhood bookstores on Small Business Saturday. After nearly being wiped out a decade ago, small bookstores are booming…

"According to the American Booksellers Association, the number of independent bookstores fell by approximately 40 percent between the mid-90s and 2009. They have recovered some of those closures, and this year, sales are up more than five percent over a year ago…

"The localism movement has been a driving force. Customers are increasingly spending in their neighborhood stores." 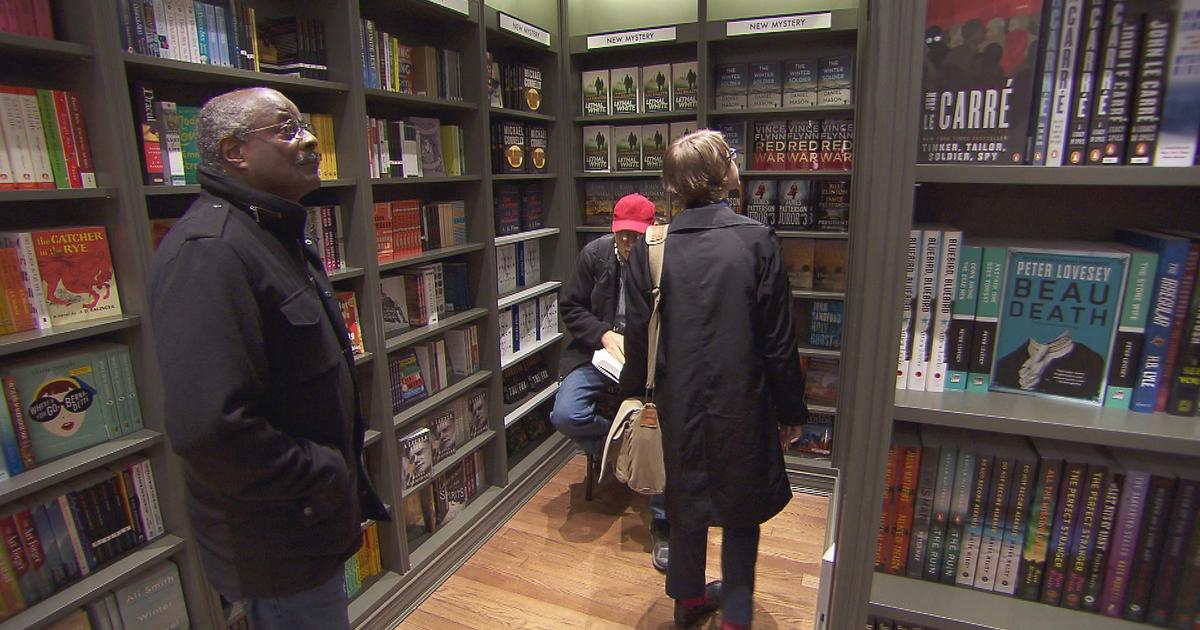 Small bookstores are booming after nearly being wiped out

THANKSGIVING 2019 & THE STATE OF THE FARMER-NATION: COST OF T-DAY DINNER REMAINS LESS THAN $5/PERSON. In an survey prepared annually since 1986, Farm Bureau reports the average cost across the USA for a Thanksgiving Dinner for 10 people will be $48.91, up a penny since last year (https://www.fb.org/…/AFBF_Thanksgiving_Dinner_Cost_Survey_H…). Adjusted for inflation that's a bargain of just $19.31.
Doubly regrettably in our Middleman-Centric Food economy, just 8 Cents of every Food Dollar is paid to the farmer. 88% of adults were NOT aware of this injustice. How many would know America is in the middle of the most devastating Farm Crisis in 35 years?
Thankfully however, the survey indicates 88% of Americans trust Farmers. Additionally, 86% of Americans have a favorable opinion of farmers (62% VERY Favorable); 57% report having been to a Farm and 48% have met a Farmer. Caleb, Megan & Jim 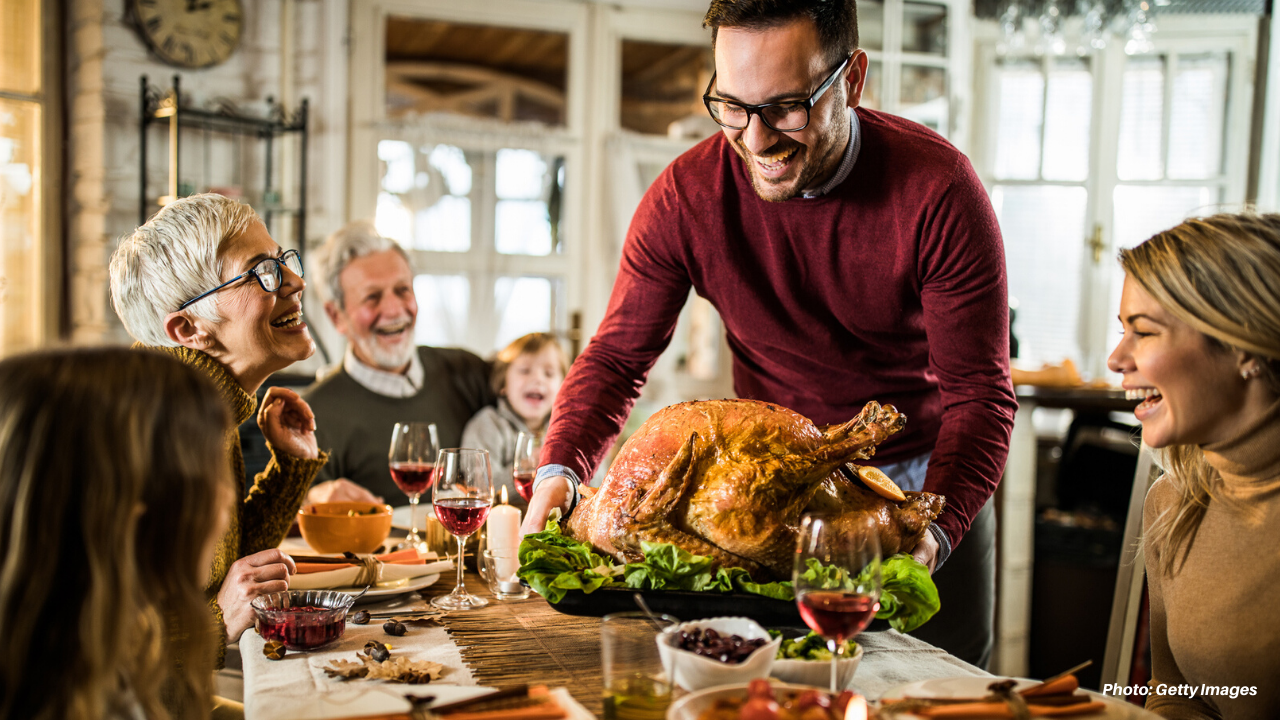 The American Farm Bureau Federation’s 34th annual survey of classic items found on the Thanksgiving Day dinner table indicates the average cost of this year’s feast for 10 is $48.91, or less than $5.00 per person.

"Herds of bison milling through Yellowstone National Park may seem aimless to the average visitor, but a new study reveals the animals are hard at work engineering their ecosystem. By rigorously mowing and fertilizing their own patches of grassland, the big herbivores essentially delay spring until late summer…

"For the new study on bison in the journal PNAS, researchers wanted to follow bison as they 'surfed' the green wave in Yellowstone National Park. Scientists began tracking the herd’s movements using GPS collars in the mid-2000s. But researchers noticed something odd about the 4,500 bison in Yellowstone: tracking data showed that while other ungulates moved with the wave to higher elevations, the bison lingered behind, reports Tom Bauer at the Missoulian.

“'They surf the green wave early in the spring,' co-author Jerod Merkle, a migration ecologist at the University of Wyoming says, 'but at some point, they stopped. [M]any bison did not reach their highest summer ranges until well after the green wave had passed.'

Even more surprising, when researchers analyzed the bison dung, they found that the animals experienced no nutritional deficits when letting the green wave wash by them. 'It threw us for a complete loop,' study co-author Chris Geremia, a National Park Service scientist, tells Ed Yong at The Atlantic. 'How can they fall behind but still have an incredibly high-quality diet?'…

“'We knew that bison migrated, we figured they followed the green wave, but we didn't know that their influence on the landscape could affect the entire way that spring moves through the mountains and valleys of Yellowstone,' Merkle says in a press release. 'They are not just moving to find the best food; they are creating the best food. This happens because bison are aggregate grazers that graze in groups of hundreds, or more than a thousand animals.'

"Yong reports that this has long-term impacts; when the green wave returns the following year, the heavily grazed areas have a more intense spring that lasts longer than in other areas. According to the press release, the effect is so pronounced that researchers can see the difference between heavily grazed and lightly grazed grasslands on satellite maps…

"'Today there is growing effort to restore bison to habitats they once roamed,' Geremia tells Osborne. 'As we seek to reestablish bison, this study shows us what large bison herds are capable of when they are allowed to seek out the best forage and move freely across large landscapes.'" 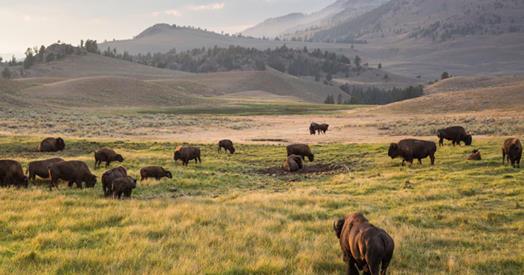 IMPRESSIVE PHOTO CAPTURED FROM SPACE: ASTRONAUTS WITNESS ERUPTION OF RUSSIAN VOLCANO. For the first time in 95 years, the uninhabited volcanic island of Raikoke – near Japan – erupted and sent a massive plume of ash high into the stratosphere.
This shot was taken from the International Space Station. and released by NASA. Caleb, Megan & JIm

"The eruption was no small event. It consisted of at least nine explosions, six of which occurred within 25 minutes, reported Smithsonian.com. The ash reached an altitude of eight miles, and the plume reached 10 miles, according to NASA." 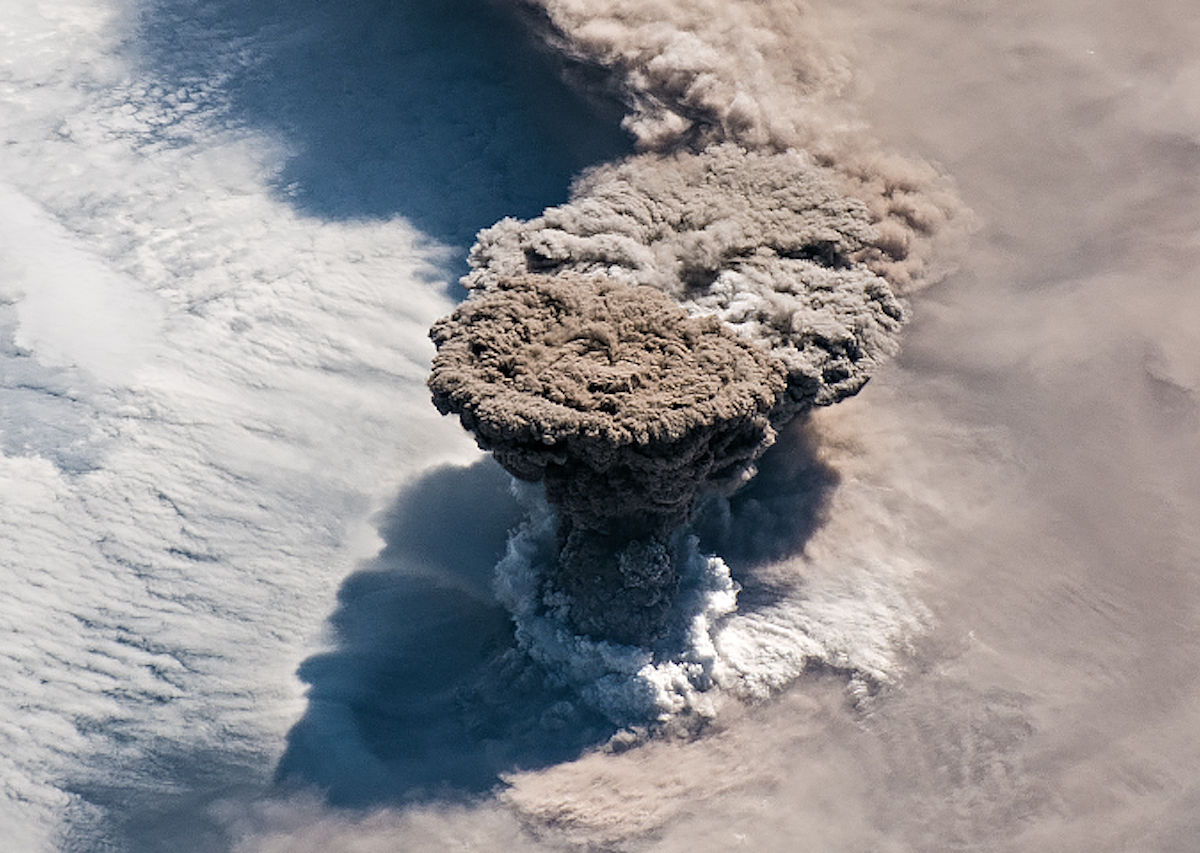 They had quite a view from up there.