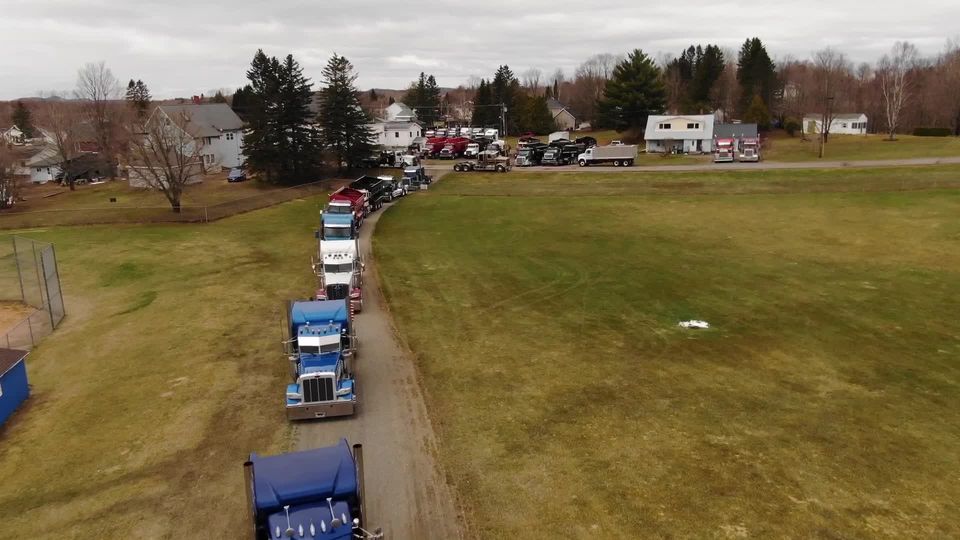 AROOSTOOK COMMUNITY COMES TOGETHER FOR LIBBY GRASS MEMORIAL. Yesterday, the tractors and trucks viewed in this video (1:50) came from as far away as Van Buren and Houlton to show support for the Grass family in Mars Hill. These rigs – and even more out of view – led the funeral procession to the Pierce Cemetery on Fort Road, five miles north of Mars Hill.
Last weekend 19-year-old Libby, active farmer participant and daughter in the Potato farming operation know locally as “the Grass Boys” suffered a medical emergency last weekend and passed on Monday.
Libby graduated last June, Central Aroostook High School Class of 2021. Caleb’s sister, Amy, was one of 37 others in that class and most grew up together going back to First Grade.
Libby was an outstanding athlete, leader and a hard-worker. She will be missed by all. Caleb, Megan & Jim
https://www.facebook.com/steven.r.holmes.9/videos/3222080484674618/


Could not resist sharing this simple quick video of today at the Mars Hill High School to honor Libby Grass. Hard to put into words the turnout that this community put on to honor this family. Maybe the pictures show some of it…..
Link to obituary:
https://www.facebook.com/1798440616896224/posts/7670566816350212/ 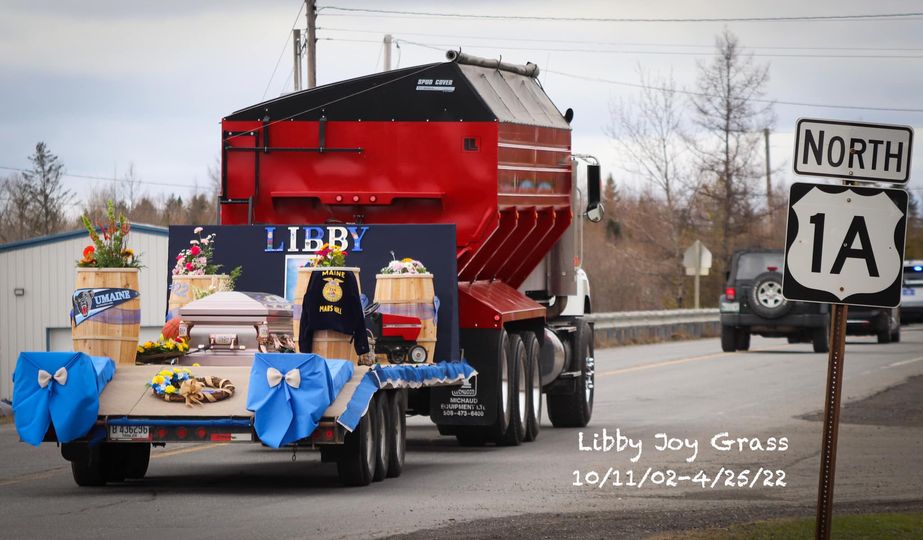 A SURE SIGN OF SPRING: SACKS OF ORGANIC FERTILIZER HAVE ARRIVED AT WOOD PRAIRIE FAMILY FARM. Organic farmers use ground up rock fertilizers – which contain essential macro and micro nutrients – in order to balance soils. Properly balanced soils offer to plants the most ideal nutrition. Good plant nutrition gives plants enhanced ability to fight off disease and pest pressure. As well, these healthy plants translate into nutrient-dense food for both humans and livestock.
Hence the adage, “Healthy Soil = Healthy Plants = Healthy Food.”
We determine the fertility needs of our fields by using a combination of petiole (‘Leaf’) and soil sample testing (40+ year’s worth) and visual observation of both crop plants and weeds.
We work with Amishman Reuben Stoltzfus, owner of ‘Lancaster Ag Products’ in Bird in Hand, PA. Reuben’s company custom-blends field-specific recipes of various organic-approved rock powders and materials. He ships the organic fertilizer blends in maxed out 2900# bulk ‘Totes’ or “Sling Bags.” Totes possess a bottom drawstringed discharge chute. They may be suspended in the air by the rugged sling loops with a forklift and positioned a fertilizer-spreading farm implement. No need to shovel dense rock dust, gravity does all he work for us. Caleb, Megan & Jim 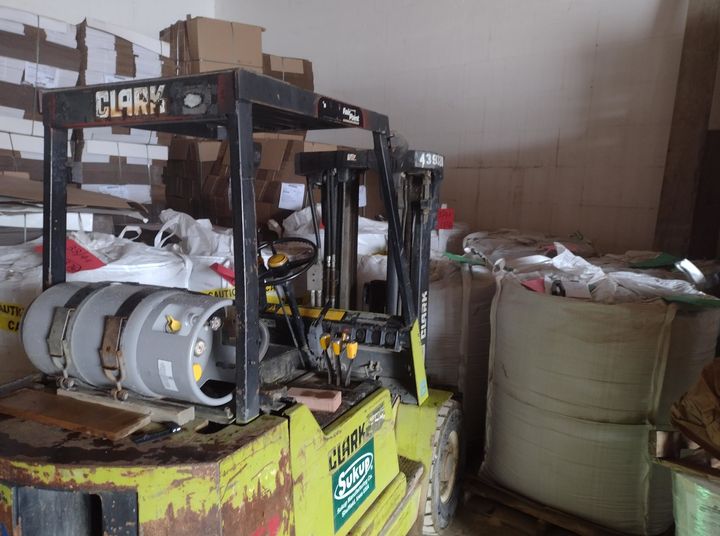 A SNOWY MAINE WORLD ONCE AGAIN. Buffeted by stiff winds – and with more flakes forecast to fall until noon today – our part of Northern Maine has accumulated 3″ of new snow from this most recent and slow-moving storm.
While we have hovered in the low 30s for the last 30 hours, yesterday morning it had descended into the single numbers (Degrees F) north of us in Hudson Bay.
In this shot taken this morning, Caleb & Lizzi’s one-year-old Rottweiler, Ralph, explores our renewed winter wonderland. While this snow slowed Maine’s march of Spring, it should disappear early next week when the weather is supposed to shift over to sunny weather in the high 50s. Caleb, Megan & Jim 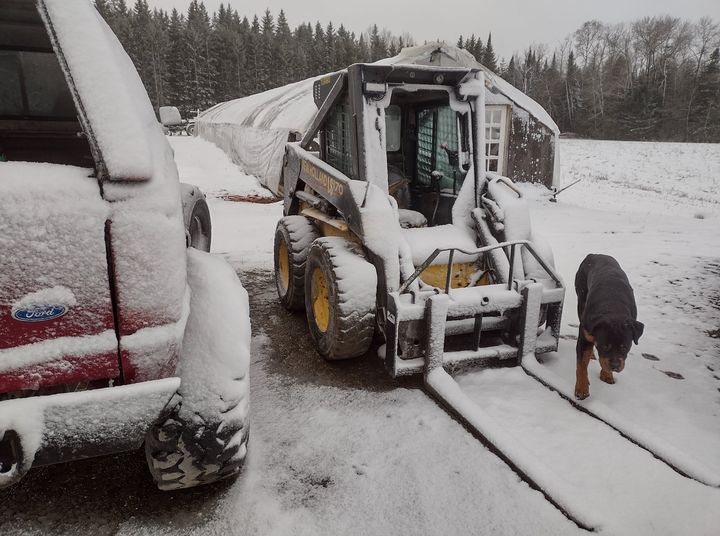 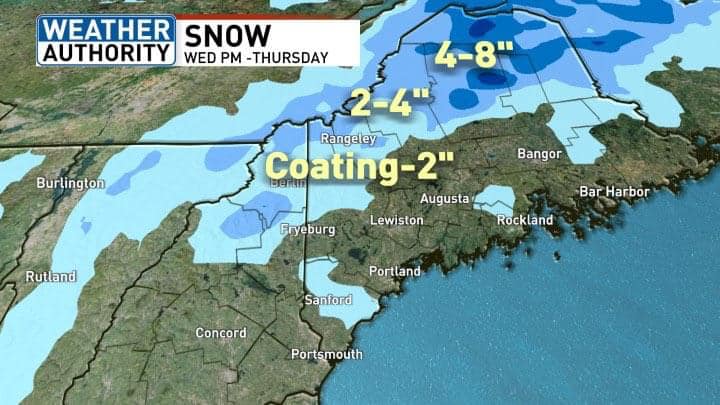 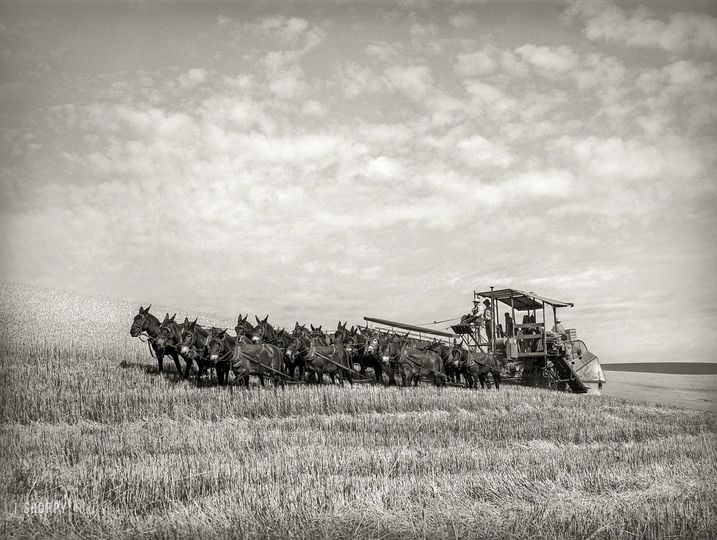 FIRST NEW WOOD PRAIRIE CALF DROPS AHEAD OF TODAY’S LATE WINTER STORM. Believe it or not, but somehow cows are able to sense when a storm is coming and will give birth in advance of bad weather.
And that was the case today when first-calf-heifer ‘Penelope’ had her bull calf in the pre-dawn hours this morning ahead of our late Winter storm.
By mid-morning our precipitation had set in, first as snow and then shifting over to cold rain. All day it never got out of the 30s, so it was a very good day to be born inside our bright and dry tarp barn with its nice spoiled-hay deep-bedding.
In this shot, the calf – a few hours old – is waking up from a nap after having stood up and had a good drink from his first-timer Mama. Penelope is snacking on a cull Caribou Russet potato (https://www.woodprairie.com/product/organic-certified-caribou-russet-seed/) while keeping close watch.
We have been shifting more toward ‘beefier’ Low-Line Angus and Penelope’s boy is 3/4 Low-Line.
Outside the pen, cowgirl Megan is temporarily securing-with-baling-wire a plywood pallet to prevent the little boy from wandering into the loafing area where the other curious cows like to hang out.
Our organic cows are given a choice and all Winter long they have access to the outside fresh air 24/7. It’s most common to find them enjoying the outside, most especially on storm-free and sunny days. Caleb, Megan & Jim 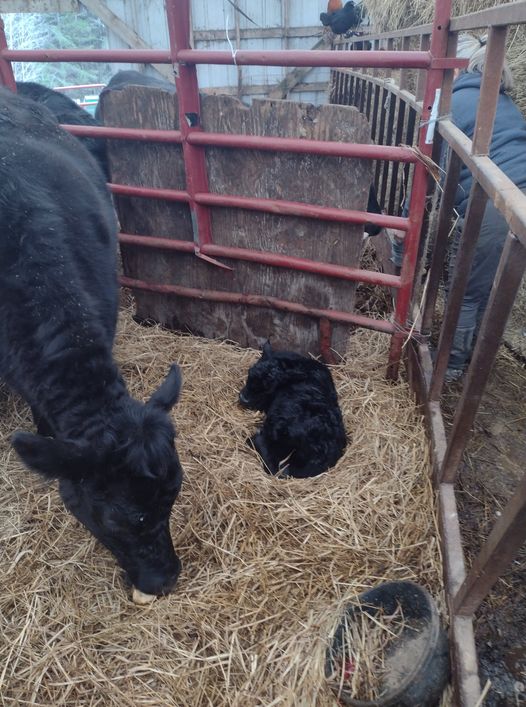 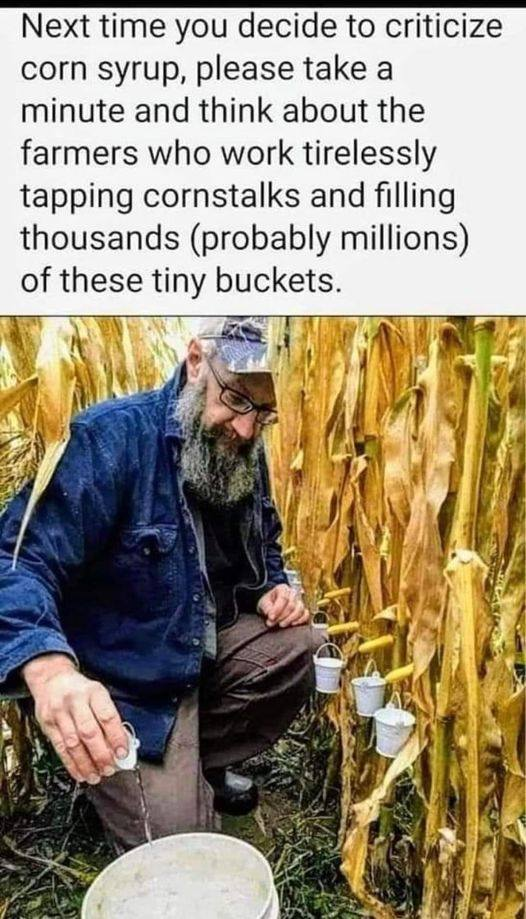 HAVE SCIENTISTS JUST FOUND DISTANT PROOF OF THE ASTEROID HIT THAT KILLED OFF THE DINOSAURS? The apparent proof – “spherules of glass” miraculously encased and protected for scores of millions of years – has been found in a former inland-seaside-location on an archeological dig in present-day North Dakota, some 2000 miles from the impact site on the Yucatan peninsula.
The ‘New York Times’ explains the discovery and includes a map.

A PBS 2-hour-special covering this development will premier on May 11. Caleb, Megan & Jim

“Pristine slivers of the impactor that killed the dinosaurs have been discovered, said scientists studying a North Dakota site that is a time capsule of that calamitous day 66 million years ago”…

“When the object hit Earth, carving a crater about 100 miles wide and nearly 20 miles deep, molten rock splashed into the air and cooled into spherules of glass, one of the distinct calling cards of meteor impacts. In the 2019 paper, Mr. DePalma and his colleagues described how spherules raining down from the sky clogged the gills of paddlefish and sturgeon, suffocating them.

Usually the outsides of impact spherules have been mineralogically transformed by millions of years of chemical reactions with water. But at Tanis, some of them landed in tree resin, which provided a protective enclosure of amber, keeping them almost as pristine as the day they formed.” 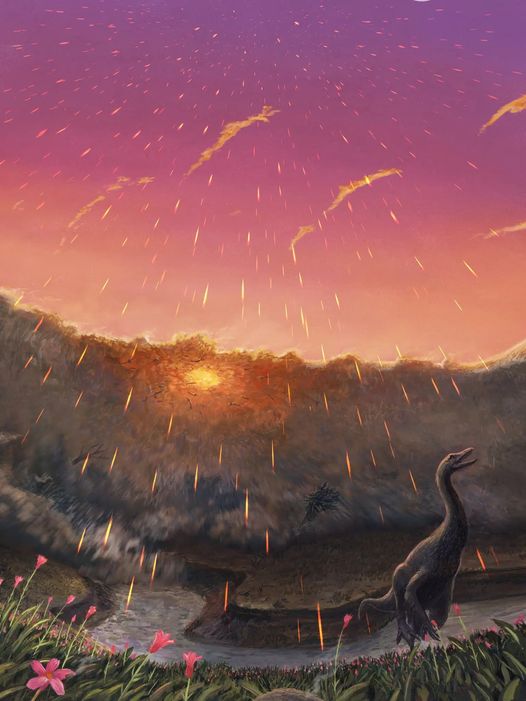