AROOSTOOK COUNTY POTATO HARVEST. Circa 1950s. Good Potato digging on Aroostook’s famous high & dry Caribou Loam. Aroostook pioneered the barrel harvest system which helped propel ‘The County’ in the first half of the 20th Century to its perch as America’s “Potato Empire.” In this era rows were universally dug with a “Potato Digger” and “Hand Pickers” would follow behind using Potato Baskets to fill the barrels and earn piece-rate wages. It was only in the 1960s that mammoth Potato Harvesters started to invade Potato country. That truck is an old-timer. But many Aroostook potato trucks of the era would only be driven one or two hundred miles per year. So frugal Aroostook famers would keep farm trucks humming to make ‘em last. The Barrel Hoist on the truck looks like it is the advanced hydraulically-powered-design which would lend credence to landing this photo into the 1950s. Caleb, Megan & JIm 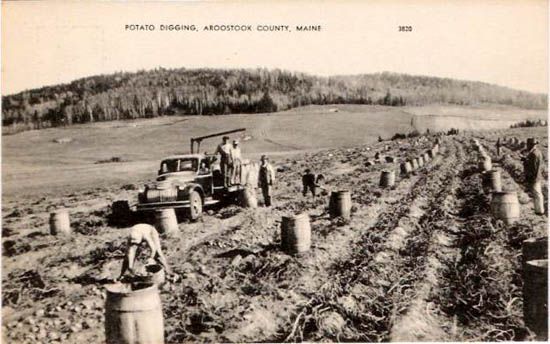 BREAKING NEWS! MAINE POTATO HARVEST NOW IN THE FINAL STRETCH! After a solid week of dry and sunny weather behind us, Maine’s annual Potato Harvest is nearing completion.
‘North American Potato Market News’ – a weekly newsletter we subscribe to out of Idaho – in referencing Maine reported this evening that “Approximately 85%-90% of the state’s potatoes should be harvested by the end of this week.” Under good conditions 7-10% of the Aroostook County crop can be harvested in a typical long harvest day.
Jim took the photo below at a Field Day back in August at Aroostook Farm in Presque Isle, Maine’s Potato Experiment Station. This one is a new promising early and high yielding Red potato which may one day become a strong competitor in the market now dominated by reliable mainstay ‘Dark Red Norland’ (https://www.woodprairie.com/product/organic-certified-dark-red-norland-seed-potatoes/).
We’re done with harvest and our full inventory of Organic Maine Certified Seed Potatoes has now been added to our online webstore. Caleb, Megan & Jim 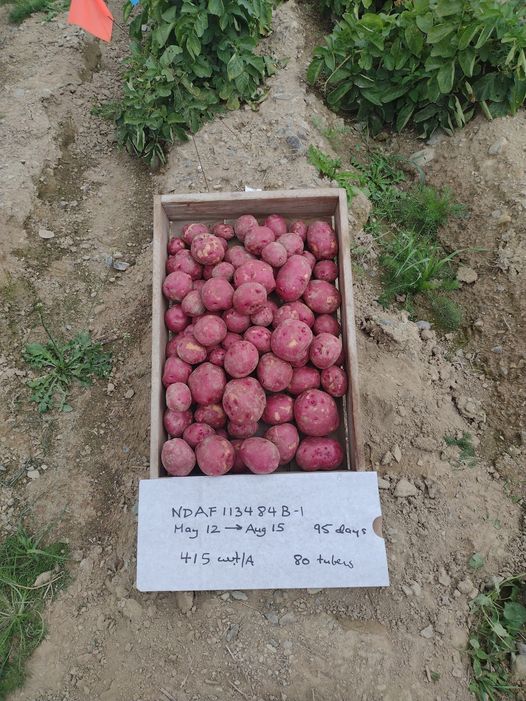 WOOD PRAIRIE 2022 POTATO HARVEST NOW COMPLETE! The last of the Potato seed plots inside our Tunnels covered with Aphid-Excluding Netting are dug and now history. Sixty seed lots of Organic Maine Certified Seed Potatoes (https://www.woodprairie.com/category/the-organic-garden/certified-organic-maine-certified-seed-potatoes/) have been weighed and logged in. Rocks have been picked and all of our Potato ground has now been planted back to ‘Aroostook’ Winter Rye (https://www.woodprairie.com/product/rye-seed-organic-aroostook/), undersown with Clover and Timothy Grass. This step initiates our soil-improving, Carbon-increasing, long-term sod Crop Rotation.
In this photo, taken late last week on the last day of digging our field crop, Caleb has just switched pallet boxes on the Finnish ‘Juko’ Potato Harvester. He is driving one of our Oliver 1650 Diesel tractors equipped with forks fashioned-over from an old forklift and positioned onto the Three-Point-Hitch.
Five Oliver iron “suitcase weights” – each weighing 110 pounds – are bolted to the front of the tractor to provide ballast to counter the rear weight of the 2400# hardwood pallet boxes full of Potatoes.
The burlap clamped to that new empty box breaks the fall of Potatoes coming over the Secondary Bed preventing them from getting bruised.
Onto each ‘Field Run’ pallet box is affixed numbered and color-coded 3×5 cards. Pallet boxes are systematically logged-in from the tractor-seat and reference the exact row the Organic Potatoes were dug from, in order to fulfill rigid fraud-preventative ‘Audit Trailing’ requirements of the USDA National Organic Program.
Inventing a good, tight system on the farm may take awhile to achieve trial-and-error refinement, but when truly well-designed it need not be burdensome or onerous. In the end it represents a reasonable exchange: we prove our Organic authenticity to our customers and we receive a premium for superior Organic crops which contribute to better human and environmental health.
It’s Win-Win for everybody. Caleb, Megan & Jim 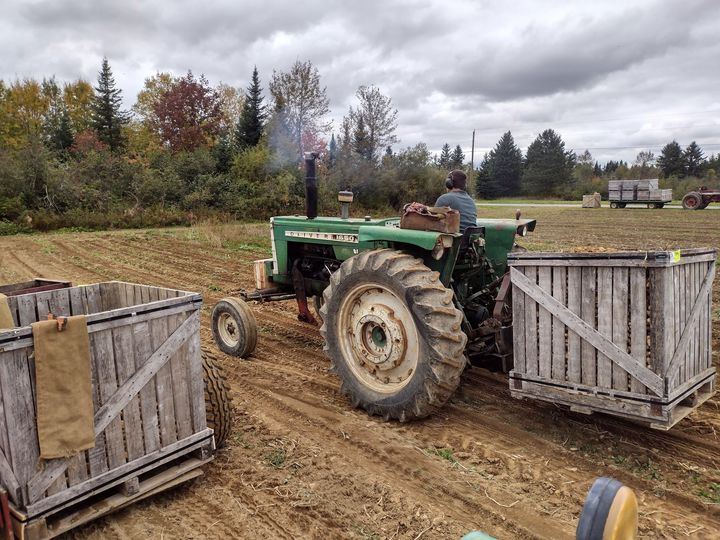 On this day in 2014 , I have shared these picture’s a few times.
I had stopped in to visit a local farmer Bernard Webb, that I have become friends with over the years… He was an elderly man , and he had about 5 acres that he plants potatoes . He still dug them the old way, and had a handpicking crew.
He has since passed on, and I miss him dearly.
On this certain day he invited me over, he had a group of students from the Amish school that had taken the day off from school to help him out. Their teacher had brought them all there that morning, and they finished up and left around 3 pm . Same time as they get out of school on any school day.
They all worked hard, with lots of laughing , and joking among each other.
As they were loading up to leave, they had bags of apples that the farmer had given them as well from his trees…and they were eating apples and in great spirits as the wagon pulled out and headed for home.
These pictures were taken with permission , and no face shots allowed.
10-2-2014 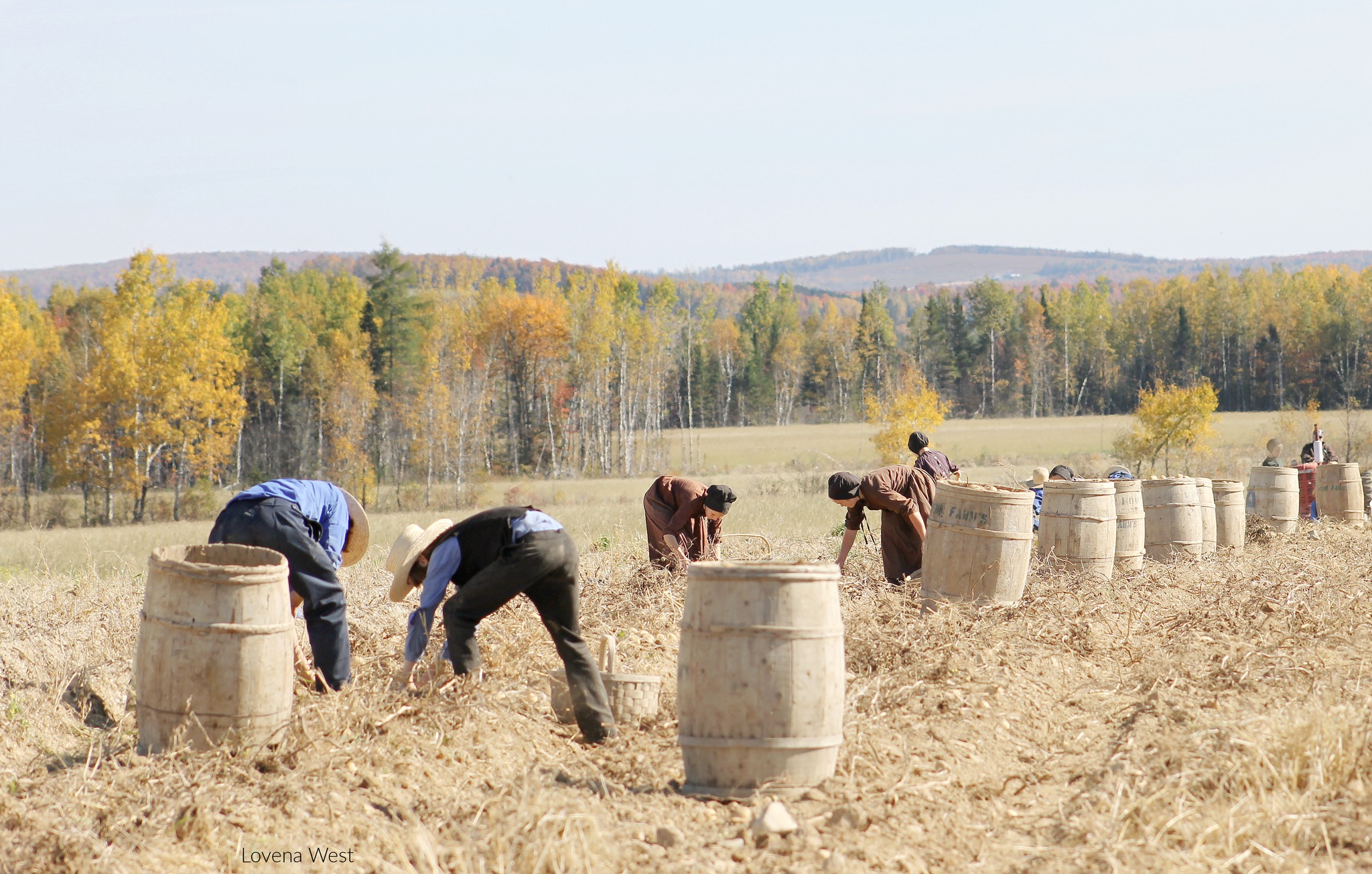 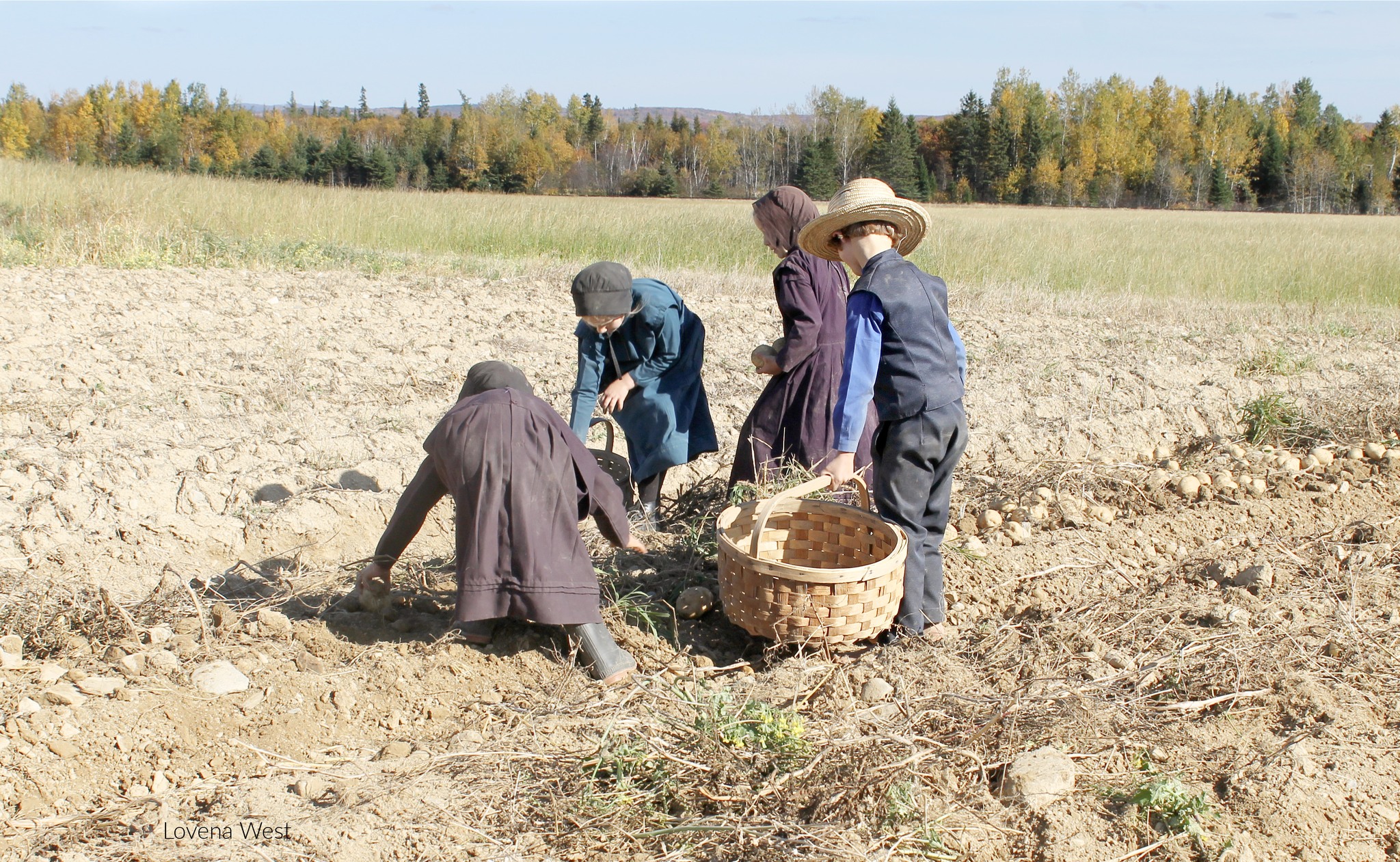 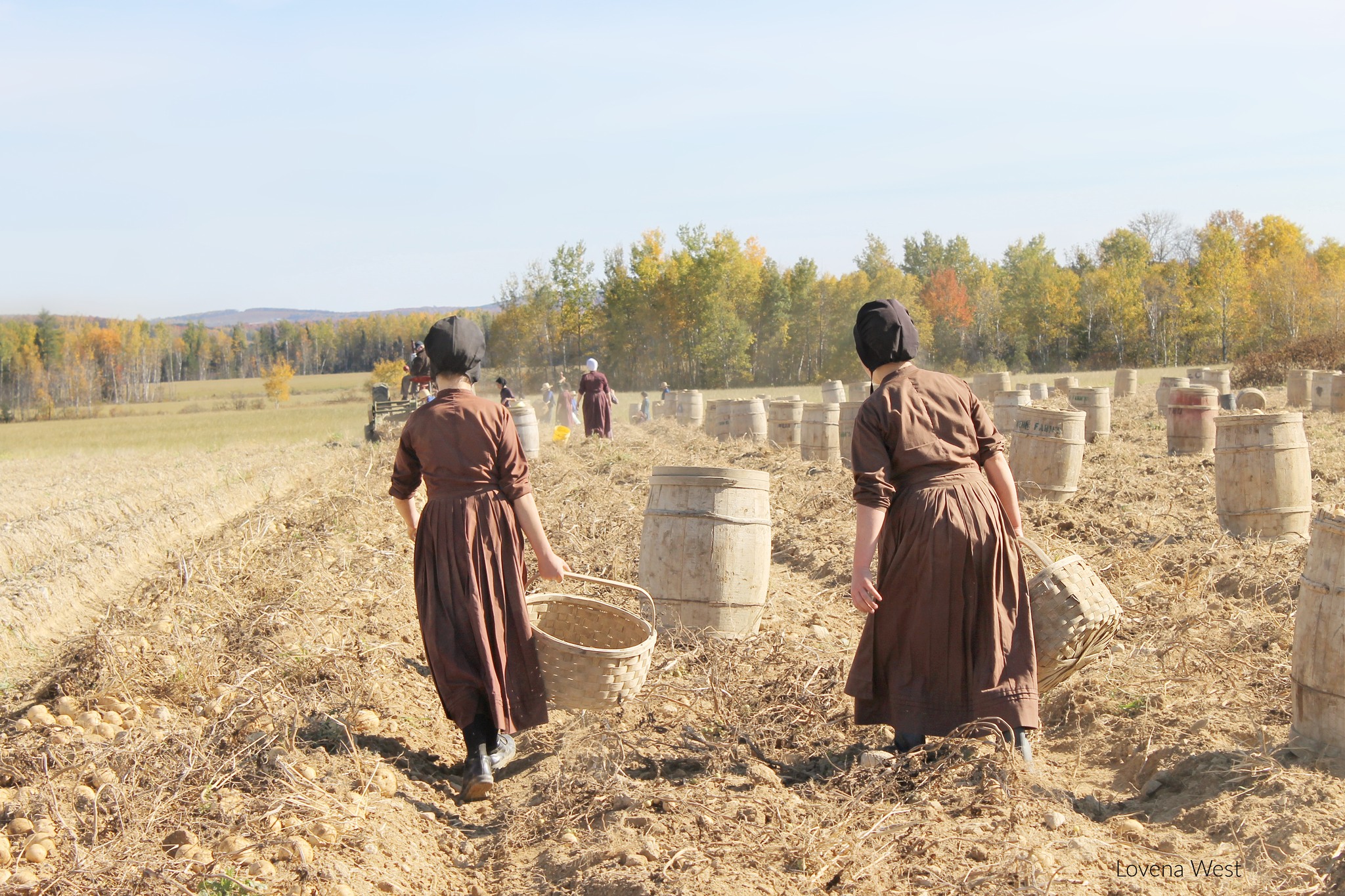 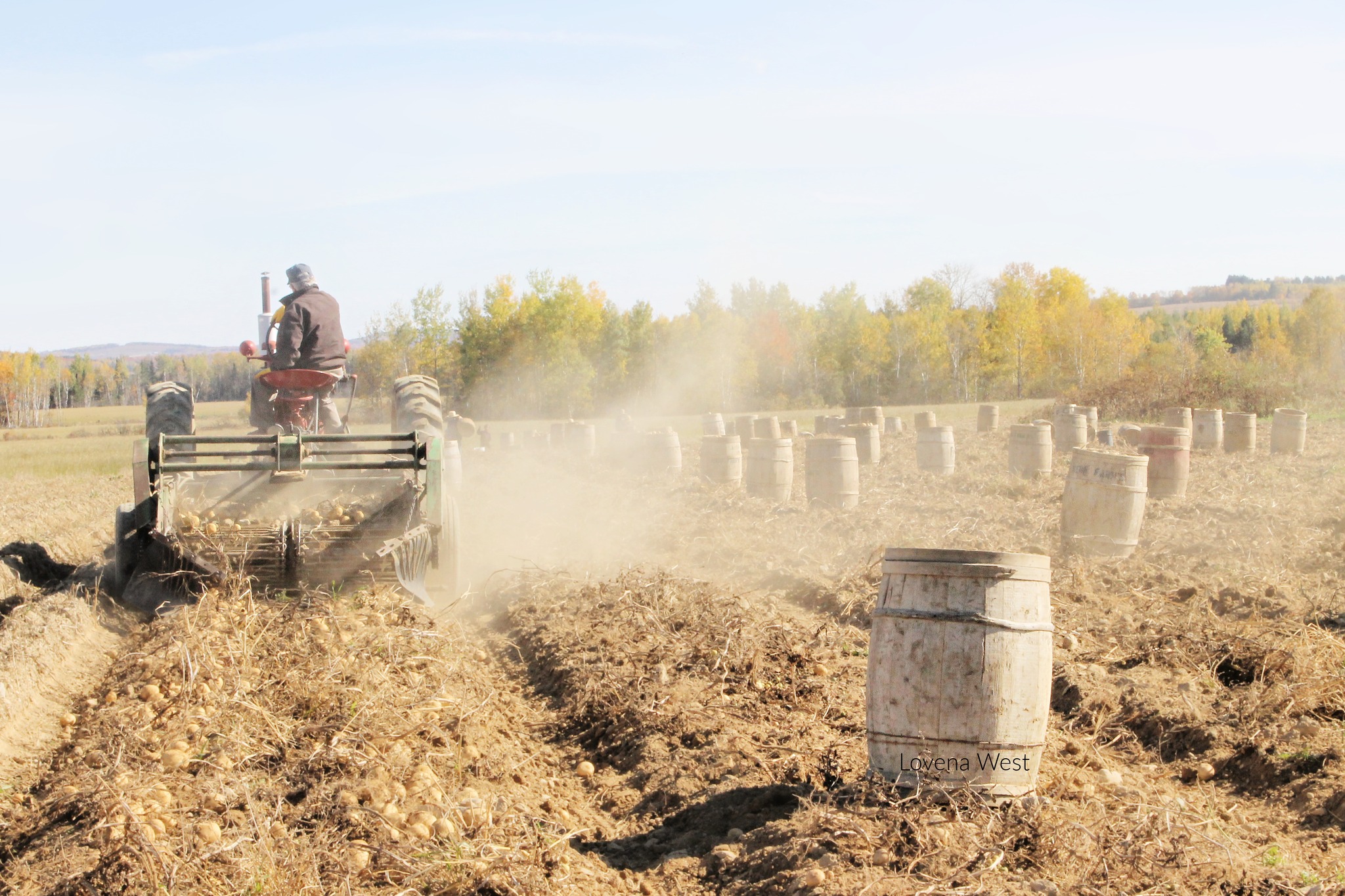 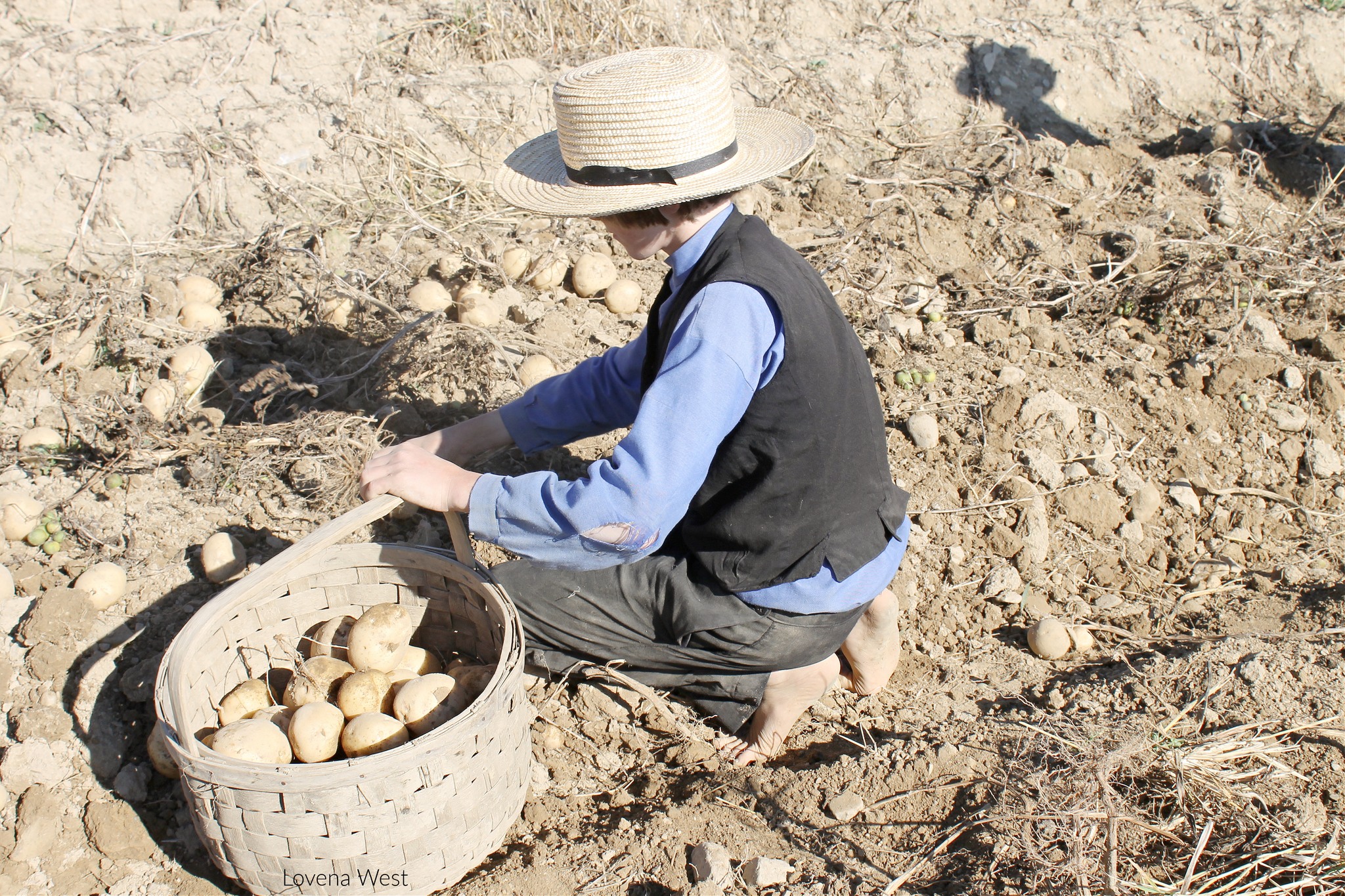 “Fifty years later, organic is no longer a niche. There are 3.4 million organic farmers worldwide, producing on 75 million hectares [185 million acres] of land. In more than 18 countries, more than 10 percent of arable land is already certified organic. The leader here is Liechtenstein (41.6%), ahead of Austria (26.5%) and Estonia (22.4%).

“In 2020, the global market for organic products reached a volume of 120 billion euros [US$117,624,000], 14 billion more than the year before. The USA (49.5 billion euros) is ahead of Germany (15 billion euros) and France (12.7 billion euros) in this ranking.” https://www.nuernbergmesse.de/en/magazine/connecting-people/organic-industry-time-for-big-ambitions

IFOAM continues its effective progress of providing service and good to the world.

When Jim spoke to the United Nations General Assembly on Earth Day 2014, he focused on the environmental and farmer livelihood benefits which organic farming provides to the world. After his presentation he was approached by two ambassadors from developing countries interested in establishing organic agriculture in their countries.
Without hesitation he aimed them to IFOAM. Caleb, Megan & Jim 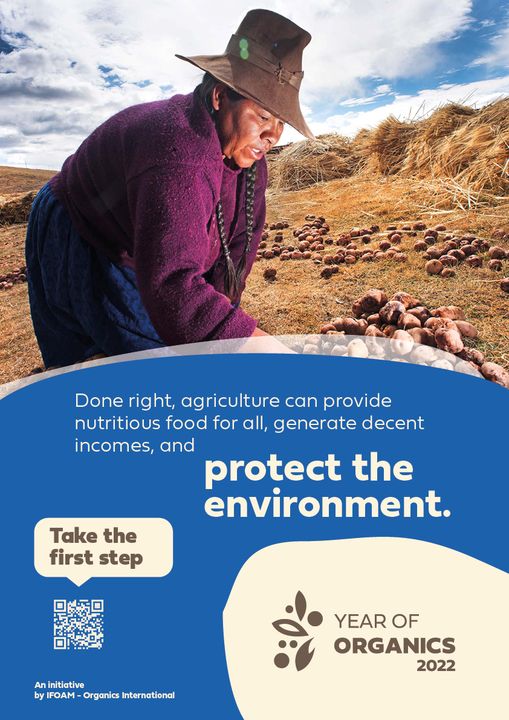 WINDING DOWN A CLOUDY, COOL POTATO HARVEST. The other day, while the crew worked at whittling down the number of Potato rows ahead of them yet to be harvested, Caleb took out our Woods 84 Bushhog to chop down the final in-field Beneficial Insect Flower Bed, which otherwise would have become an obstacle to digging.
Long blooming Cosmos, legume Hairy Vetch and bright Sunflowers were the dominant species right down to the end.
In the last week as the temps lowered, we observed a noticeable drop in the number of bees and Beneficial Insects which were frequenting the Flowers.
Another sign Winter’s on the way in Maine. Caleb, Megan & Jim 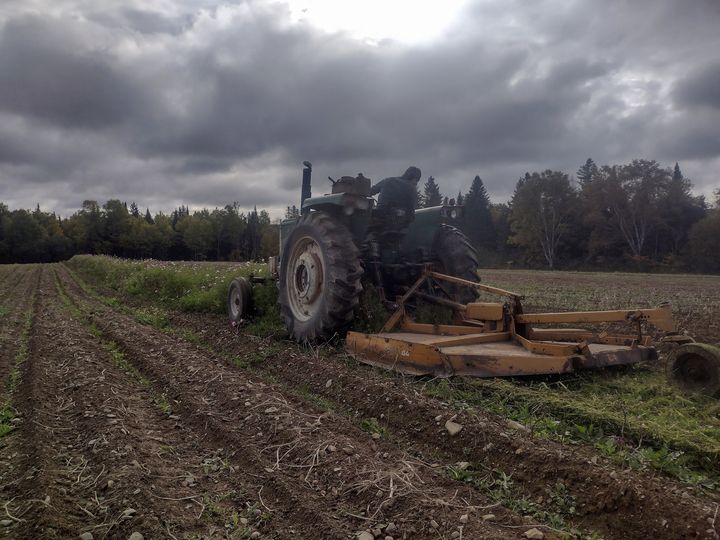 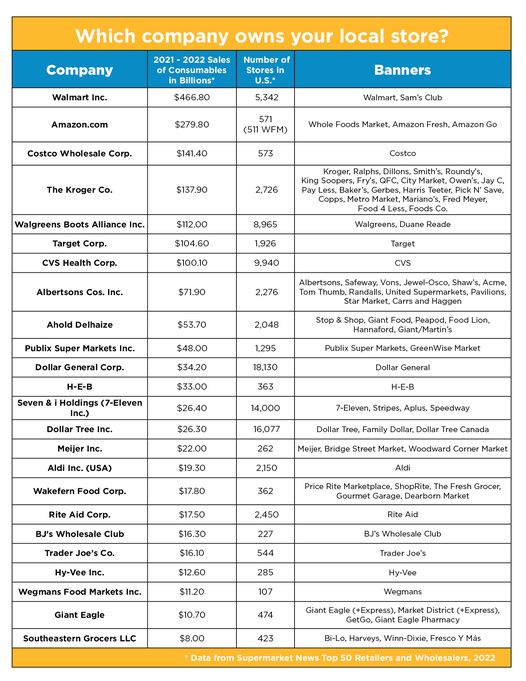 “MUD ‘EM IN, MUD ‘EM OUT!” It was over 40 years ago when we first heard this crusty, well-worn weather observation uttered by an old yet fully-determined Maine Potato farmer one wet Fall.
It references the detected weather pattern that a rainy Spring will often be followed by a wet Fall, classically with a dry Summer sandwiched in between.
So, Maine Potato farmers after having gone through tough planting from wet ground last Spring, kept tucked in back of mind the premonition that hard, muddy digging could be ahead for ‘digging’ this Fall.
So far this Fall, rain has regularly been interrupting Potato harvest.
Here in this shot, it was last Saturday morning, following a four-day-break because of rain. With chilly gray skies, temps in the low 40s and high winds courtesy of T.S. Fiona we work to pull our ‘Juko’ Potato Harvester through a mud hole. At left, Caleb is crouching and attaching a special shock-obsorbing tow rope with a clevis to the drawbar of our Oliver 1850 Diesel. Similarly, Justin is bolting the other end to the Oliver 1750 pulling the Juko. Jim in driving the 1750. We had success getting unstuck on the second try.
Today we’re again waiting for dry ground.
It is hard-won experience and sarcasm which has spawned some local gallows humor, “God gives the Aroostook farmer good weather in the Spring to plant potatoes, and good weather in the Fall to dig potatoes. Though not necessarily in the same year.” Caleb, Megan and Jim 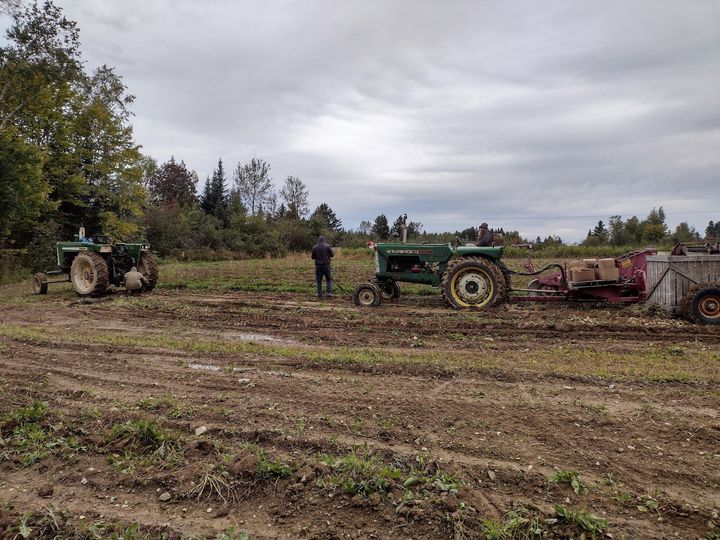