UPDATE: CAN USA KEEP OUT ‘POTATO WART’ WHICH A NEW REPORT SAYS IS A BIGGER PROBLEM IN PEI THAN CANADIAN FEDS WILL ADMIT? A new scientific report from USDA-APHIS (https://www.aphis.usda.gov/aphis/newsroom/stakeholder-info/stakeholder-messages/plant-health-news/draft-pathway-analysis-potato-wart-canada) diplomatically couches Prince Edward Island’s ‘Potato Wart’ problem as “likely larger” than Ag Canada officials will admit. Also, the report calls current American mitigation measures – preventing Potato Wart from jumping into the USA – as “insufficient.”
These new facts confirming American potato farmers’ worst fears ought to be triggering warning bells and new protective action.
There was a time when long ago, areas in the USA had Potato Wart. But decades ago Potato Wart was eliminated and there is currently no known Potato Wart anywhere in the USA.
Potato Wart fungal spores can remain viable and ruin soil for 70 YEARS, essentially eliminating an infected field from potato production for a lifetime. Historically, quarantine measures have been the only means of preventing Potato Wart spread.
Canadians are great people and wonderful neighbors. However, the clear priority is for the USA to protect American soils at all costs and PREVENT ANY SPREAD OF POTATO WART.
“A stitch in time saves nine.”
Canadian Feds do have a responsibility to financially support impacted PEI farmers.
We know firsthand the trials and tribulations of a good friend who was Canadian potato farmer. Thirty years ago, he like many other Maritime potato farmers, through no fault of his own, was financially devastated by the PVY(N) (Potato Virus ‘Y” Necrotic strain) outbreak on PEI and the ensuing embargo of Canadian potatoes. Farmers suffered towering financial losses. For decades, he and many other family potato farmers in the same boat were promised relief by the Canadian Feds. But the relief never came. When he died he was a salt-of-the-earth but financially broken farmer.
Now, here’s a chance for the Canadian government to show they have learned their lesson from past failures. They can provide justice for farmers, and financial relief from a problem the Feds themselves had a hand in creating. Caleb, Megan & Jim 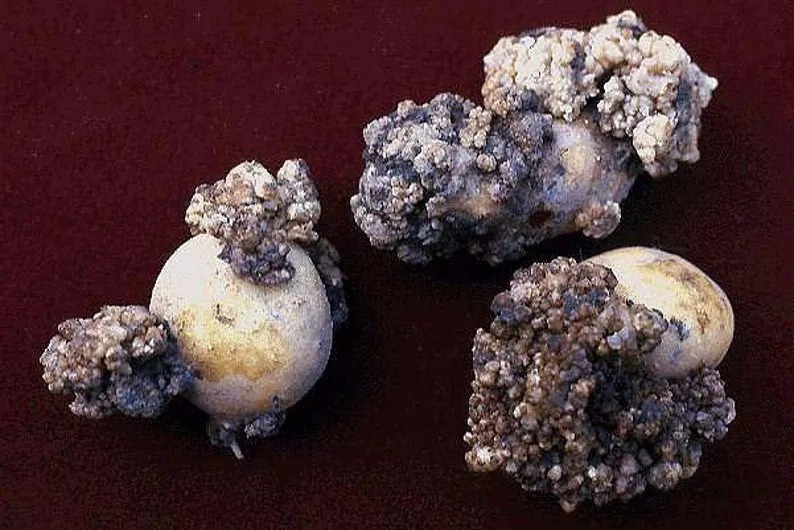 WOOD PRAIRIE FALL WORK: INSTALLING MORE UNDERGROUND IRRIGATION MAINLINE. For the past couple of years we’ve been installing underground irrigation main lines so that we can more easily and quickly get water to our various rotated Potato fields.
This shot is from last week. Is shows Caleb (right) and Justin making a concrete “Thrust Block” at a key pipeline connection. Thrust blocks securely anchor the weak links in irrigation main lines and prevent the system from blowing apart under the high pressures – about 160 psi – of modern irrigation pumps.
We use 6” thick-walled SDR 21 Schedule 80 PVC underground pipe which comes in twenty-foot-lengths. We’ve been told the price of the pipe doubled in cost the year after we bought it.
Concrete has been in short supply and orders must be placed at least a week in advance.
The morning of this photo the local concrete plant called. Due to a cancellation they had an opening that same afternoon. Caleb & Justin jumped at the chance and rearranged their work day. On a brilliant, sunny October day in the 50s, they constructed some of the needed thrust-block-forms.
The concrete truck arrived late the same afternoon. They were able make good use of this unexpected gift of concrete. This Fall, 3500#-rated Redimix costs $135/yard delivered plus tax. Caleb, Megan & Jim 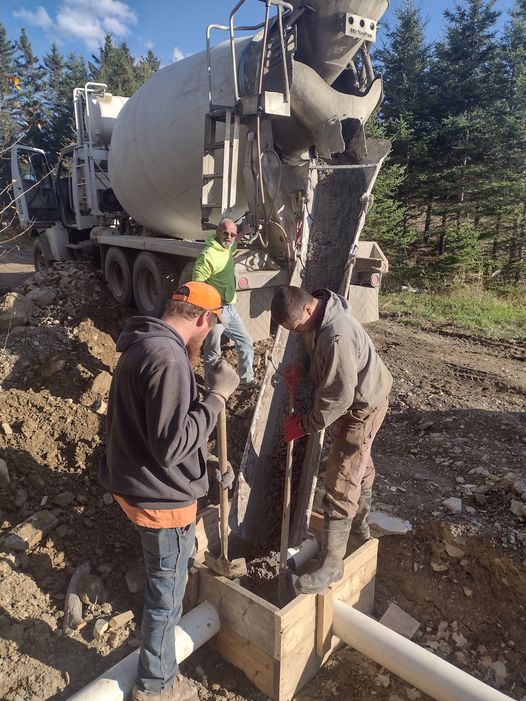 WHAT THE WOOD PRAIRIE CREW WAS DOING TODAY BEFORE NOON. We had a wholesale ‘Tablestock’ (Potato industry term for eating Potatoes) to put up this morning. It hasn’t been that long since these Organic Potatoes were harvested so they are still tender.
At this early storage stage the tubers would be prone to skinning up if we ran them over our long brushing & sizing Grading line. So instead we opted to use the necessarily more labor-intensive technique which required the help of most of the Wood Prairie crew.
Here, Caleb (right) is using the ‘Box Rotator’ on the battery-powered Yale Forklift to gently pour the ‘Field Run’ potatoes from 4’x4’x4′ hardwood Pallet Boxes onto our wide Haines ‘Nylon Brusher (made by Haines Mfg in nearby Presque Isle). Justin (orange) alternates helping Caleb “Grade” out the bad ones, in between weighing the cartons and stacking them onto the pallet.
Jim is the one sitting and operating the foot-pedal-operated Haines ‘Single Bagger.’ He and Cassidy (left) and Heather (right) are pulling off the ‘Tops’ (the largest 40% of tubers), leaving behind the smaller tubers which we will sell later in the Winter & Spring as Certified Seed Potatoes (https://www.woodprairie.com/category/the-organic-garden/certified-organic-maine-certified-seed-potatoes/). Those sorted-out Seed tubers are then placed into smaller hardwood pallet boxes like the one at right which hold 1100# of spuds. The variety we’re grading is Caribe’.
Outside it was raining, preventing doing Fall work. We’ve had a good stretch of dry weather but now that appears to be shifting. Last Friday we had 1.5″ rain and this new system is expected to drop at least two more inches.
Thankfully, all of our crops are harvested and safely in storage. Caleb, Megan & Jim
. 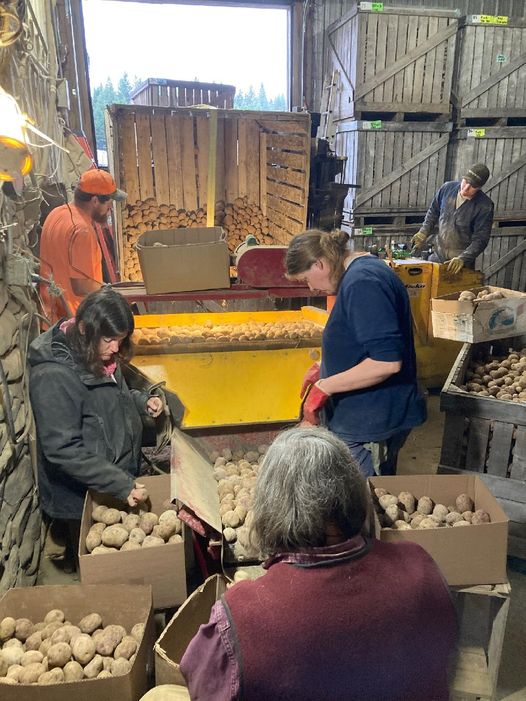 “COWBOY GETTING HIS LASSO READY.” KANSAS. Circa 1902. From the National Archives. A cowboy drives a herd of cattle across Kansas. Caleb Megan & Jim 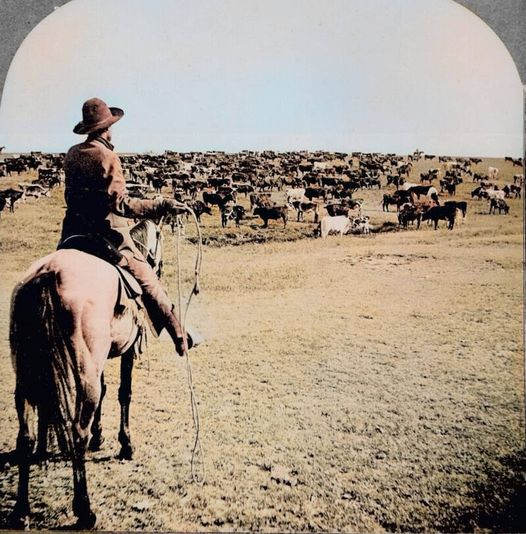 MAINE TALES. ‘POTATO ECONOMICS 101.’ EASTON, MAINE. Circa 2012. A week or two back, a candidate from Florida running for Governor here in Maine spoke before a group of Maine farmers. Weren’t they surprised when he bad-mouthed Maine Potato farmers, calling them “unproductive.” On the other hand, maybe they weren’t too awful shocked because he’d just got done reaming out Maine’s Dairy farmers for “high milk prices” and being small and inefficient.

Anyway, in Aroostook County it’s pretty well understood that insulting your neighbors is not the best way to make friends or win votes. What’s more, fact is, after growing Potatoes here for 200 years Aroostook farmers have figured out how to grow potatoes as well as anybody anywhere.

A family friend up here grows potatoes on a pretty big scale. He sells his spuds to the local McCain’s French Fry plant up in Easton. About ten years ago our friend was telling us firsthand about the business of growing commodity potatoes. Over the intervening years, both the costs and the pay rate have crept upwards. However, the ratio of costs-to-income has remained roughly the same. And so, those numbers from a decade ago pretty fairly reflect the situation, now as it did in those days.

Now, if you’re down at the Capitol in Augusta, it might seem like that $7000 revenue just appears like magic. But here in farm country where we sweat and toil, we know better. In order to grow those 330 sacks, the Maine Potato farmer must own a staggering amount of equipment, land and buildings. He must pay the banker, the insurance company, the fuel company and the taxing authorities, along with an army of local suppliers. To grow the crop the farmer must buy the seed, and the fertilizer, and the spray material.

He must hire a crew to help plant the crop, tend the crop, harvest the crop, and pile the crop into storage. Eventually at odd times during the long Winter, the farmer – on short notice – must gather together a crew of neighbors to ‘rack over’ (grade) the potatoes. Deploying a small fleet of a half-dozen or more big ‘wheeler’ trucks, he must in rapid succession load the trucks and haul the potatoes – without freezing – to the Easton plant in a revolving-loop procession, all within the confines of the narrow delivery window dictated by the plant operator.

For all the farming effort, for all the grief, for all the risk, for that single acre of spuds that Aroostook Potato farmer was rewarded the princely sum of $2300. That works out to less than $7/sack or 7 cents/pound.

Is it likely we can really learn much about “productivity” from one lost politician who has yet to actually make anything during his lifetime besides hot air? Doesn’t seem too likely. 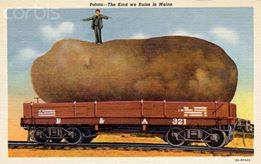 SNOW IN NORTHERN MAINE TEN YEARS AGO TODAY. That October had turned very wet. But we had dug the last of our potatoes out of this field before this snow fell on Oct 14, 2012.
Prior to the snow we had picked the rocks off this field and then Chisel-Plowed.
While chisel-plowing we spun on Cover Crop Oats at a heavy rate of 200#/Acre (https://www.woodprairie.com/product/oat-seed-organic-common/). If you can get a threshold of just 3″ of grain top growth during the Fall it will reduce by 90% the erosive impact of raindrops battering bare soil and helps protect the soil. The oats will winter-kill when night-time temps consistently hit the mid-teens. A golden mat is then left behind and does a great job protecting the soil. The mat can then be easily incorporated the next Spring just ahead of planting.
This snowfall eventually melted off.
We had a neighbor, ‘Doss’ Morse who was born October 6, 1899. One year it snowed on his birthday when he was a young man. And that snow didn’t leave until the next April. That early Winter hasn’t happened since, so that was truly a ‘Hundred-Year Event.’
However, from here on out, when it comes to snow, anything is possible in Northern Maine. Caleb, Megan & Jim 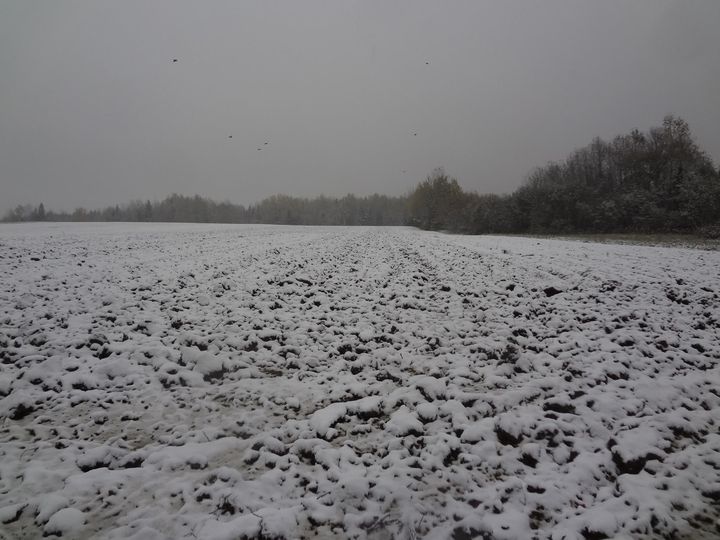 NEIGHBORING FARMERS HELP INJURED FORT KENT MAN HARVEST HIS POTATO CROP. Everyone likes a heart-warming story and you will want to read this story about an Aroostook County farmer who was helped by his neighbors to stave off a potential economic disaster. https://www.bangordailynews.com/2022/10/14/news/aroostook/aroostook-potato-harvest-help-joam40zk0w/?mc_cid=ab81497487&mc_eid=3ffbc641ad
There are still good people around and some of them live in Aroostook County, Maine! Caleb, Megan & Jim 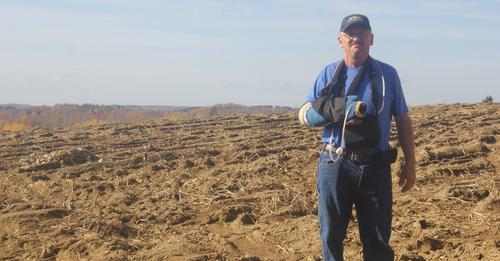 THE LAST DAY OF 2022 POTATO HARVEST ON WOOD PRAIRIE FAMILY FARM. Last week, Megan (right) and Cassidy finished up our harvest of Organic tissue-cultured disease-free Potato “Minitubers” which we grew out from lanky alfalfa-sprout-like ‘Potato Plantlets.’
The Plantlets were planted back in June into gray ‘Mushroom Totes’ filled with Karl Hammer’s top notch ‘Vermont Organic Compost’ growing media. The Plantlet harvest consists of small disease-free Maine Certified Seed Tubers known in the Potato industry as Minitubers.
These Minitubers were grown inside our hundred-foot-long ‘Short Tunnel’ which is covered with Aphid-Excluding netting. The extremely-fine-mesh netting prevents entry by destructive Aphids which can transmit yield-crushing Potato Virus.
Next year these Minitubers will be planted into the soil inside our moveable 600-foot ‘Long Tunnel,’ similarly protected with Aphid-Excluding netting.
After further multiplication in our rotated Organic Potato fields, our Organic Maine Certified Seed Potatoes are offered for sale to home and market gardeners like you in all 50 States. https://www.woodprairie.com/category/the-organic-garden/certified-organic-maine-certified-seed-potatoes/
Parked beyond the team is our mechanical ‘Lockwood’ Rock Picker pulled by a White 105 Diesel tractor. Beyond the Rockpicker is our Tarp Barn which houses our Organic hay and small herd of Organic Dexter/Low Line Angus cattle on stormy Winter days. Caleb, Megan & Jim 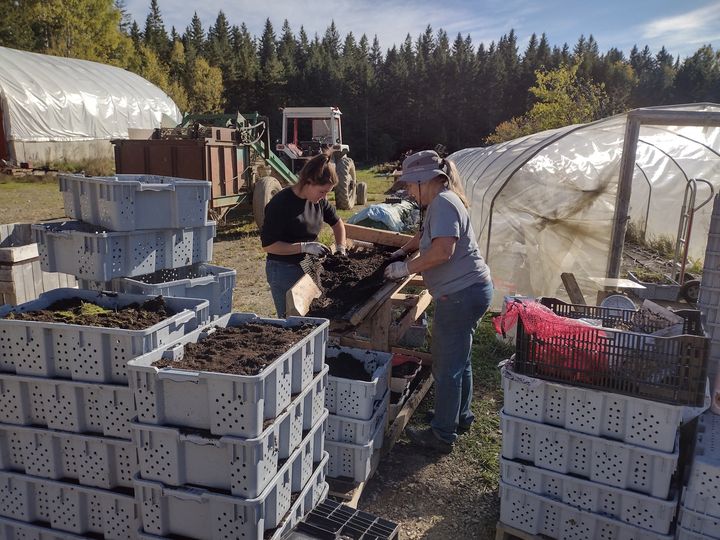 Kaitlyn Rock and I visited Abol Bridge last evening and we were treated to this spectacular view. Stunning. 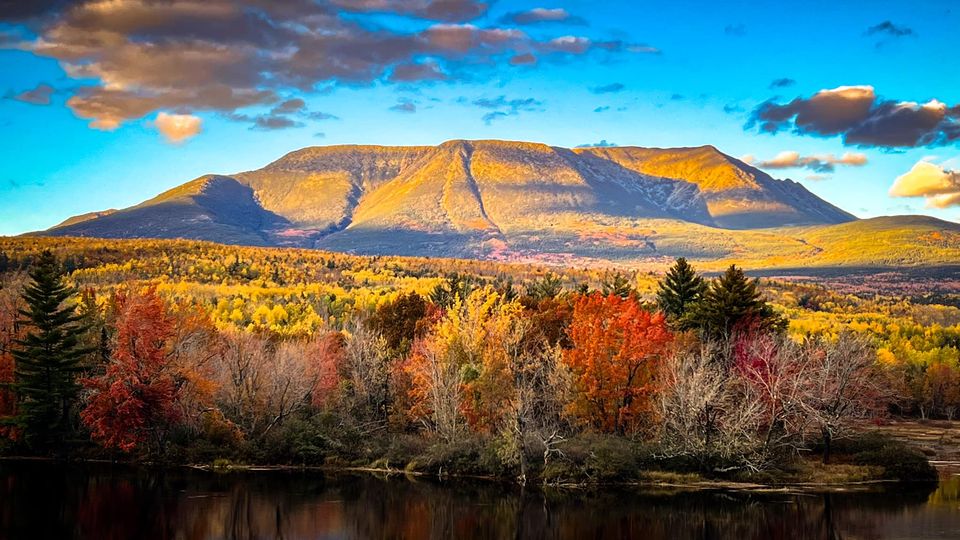