Winter can arrive early in Aroostook County, during the second half of October. Sometimes with snow and sometimes without.

It had not been an easy Fall. Persistent rain had prolonged the Aroostook Potato Harvest long into October. Weeks before, ‘Potato Harvest Break’ had ended and area students were back hitting the books and in their classrooms studying their Ps & Qs. After Harvest Break ended, harvest help was hard and getting harder to come by.

It was the end of October and neighbor Grover Patterson and his son, Scott, were still struggling to dig their potato crop which was planted on the west side of what map makers call ‘Estabrook Hill.’ Back in 1880, Wilson Estabrook came over from Canada and bought 500 acres of wildlands for $2 an acre. This plot was in the middle of nowhere but located in the ‘Portland Academy Grant’ on the south side of Bootfoot Road. Never marrying, ‘Wils’ worked hard, cleared off the trees and succeeded in establishing a productive farm.

Back in pioneer days, times were friendlier and first names sufficed. The local kids attending the nearby one room ‘Bootfoot School’ called it “Wilses” Hill. The Winter attraction which gave Bootfoot kids purpose and a good reason to get out of bed on cold Winter mornings was the fun of sledding down nearby Wilses Hill before school and during recess.

Compared to the flatlands of Aroostook, Wilses Hill is high and offers the best views in our corner of the Township of Bridgewater. On top you could see numerous farms, and out to the west and north, the Maine Woods for miles and miles over to Number Nine Mountain and Maple Mountain on the horizon. Wilses Hill was high enough that there was nothing to obstruct the arctic air blowing in from the northwest. A gentle breeze on our Wood Prairie Family Farm – protected by the Maine Woods – nearby to the west might be a near gale up on the highlands of Wilses Hill.

So, Grover came by one late October morning relating that he had virtually no crew left and wondered if Jim could help him and Scott get out the last of their potatoes. He could.

Knowing that it would be cold Jim prepared, only he didn’t prepare enough. Those end-of- October days that Fall were uniformly overcast, with daily high temps in the upper-thirtys. Up on Wilses Hill the bitter Canadian air blew as a relentless blast from sunup to sundown. Still in his mid-twenties Jim had not yet figured out that the only hope of cutting the wind and staying warm was to wear one-piece insulated coveralls. His layers of wool clothing were effective for the calm of the flatlands, but no match for the daily tempest on Wilses Hill. But there was work to be done, so no choice but to just soldier on.

Grover and Scott dug their crop one potato row at a time with their old John Bean Mfg ‘Barrel’ Harvester. Dug potatoes exited the ‘Secondary Lag Bed’ and funneled into sturdy 12-peck cedar Potato Barrels which hold 165 pounds of potatoes. When the barrel was full a foot-operated pedal allowed the floor to drop, the barrel to then kiss the ground and gently get left behind as the harvester steadily crept forward. The aftermath was a straight row of potato-filled-barrels awaiting their turn to be picked up later on by the flat-bed barrel truck with its hoist and barrel grapple.

Harvesting potatoes directly into accompanying bulk body trucks was the coming thing. However, some smaller and traditional farmers still back in those days held fast to the potato-barrel-centric systems that they and their fathers and grandfathers knew well and trusted.

That cold Fall we succeeded in digging every Potato we could get off of Wilses Hill. The wet holes never dried enough to surrender their cache. Rain that comes to Northern Maine in October doesn’t evaporate, it just accumulates there in Potato ground and gets in the way. The straggler potatoes left behind got froze solid with Winter’s approach. They thawed the next Spring and then decomposed down to again become one with the earth.

And during planting that following Spring, with past hardships forgotten, amidst the sunny, bright mornings there was universal, infectious optimism among farmers that this year has all the makings for one fine crop of potatoes. 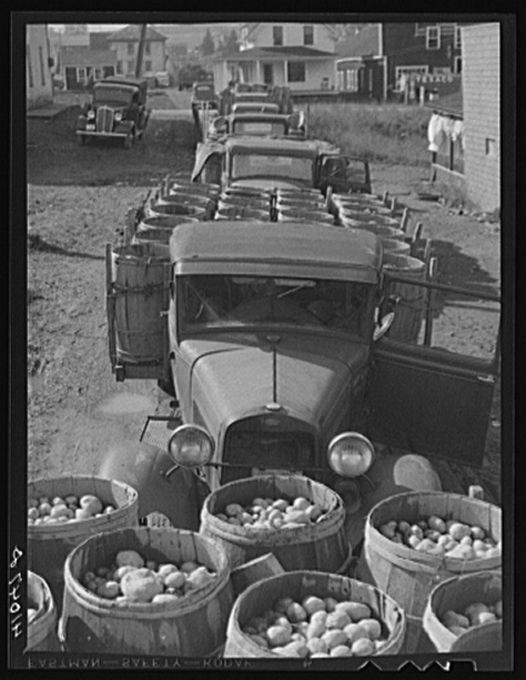