DIGGING POTATOES ON BOOTFOOT ROAD SIXTY YEARS AGO. BRIDGEWATER, MAINE. Circa 1962. (photo credit: Ray D. Yerxa, Yerxa Family Farm). In addition to our next-door-neighbor Grover Patterson, another farm on Bootfoot Road also dug their potatoes with a John Bean One-Row Barrel Harvester.
Yerxa Family Farm is halfway out Bootfoot, where the Whitney Stream crosses the road. ‘Yerxas’ are on the north side of Bootfoot in the ‘Bridgewater Academy Grant.’ In this shot taken by Ray, driving that Oliver Super 77 or early 770 tractor is Ray’s son, Bill. On the ‘Bean,’ Bill’s wife Irene is the one doing the waving. Bill and Irene’s son, Bo, is at left next to the harvester engine.
Of the three remaining workers, one is a local woman from Town. The other two are a Micmac couple from the Big Cove Reserve in New Brunswick. They were the last of three generations from the same family who would come over from Big Cove to work on the Yerxa Family Farm. That one fact says something significant about both families. Caleb, Megan & Jim 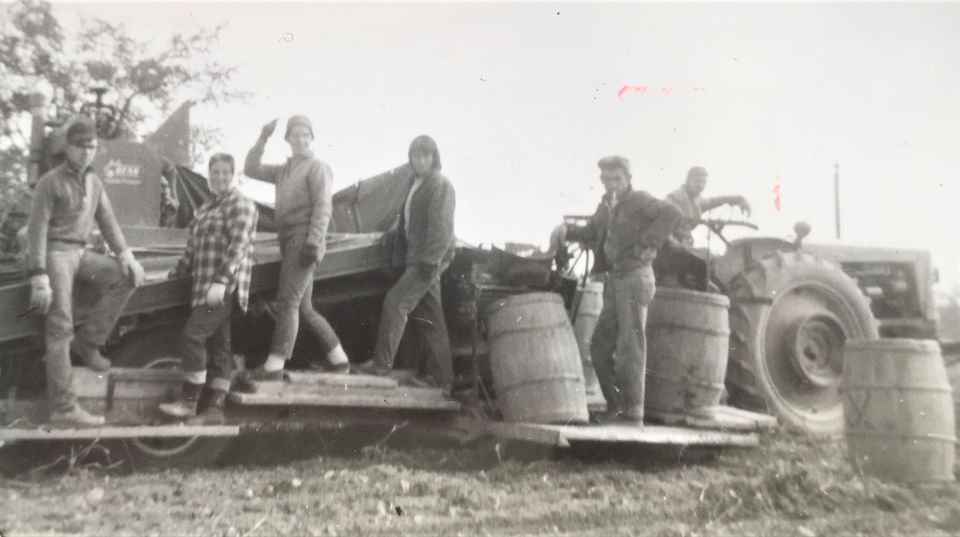