THE SHIPWRECK ON MONHEGAN ISLAND. We had a Nolan family reunion on the Coast of Maine this week. On one day we took the ferry out from New Harbor to Monhegan Island which, visible from the mainland, is about 14 miles offshore. The passenger ferry ride takes about an hour. Some residents and Inns on the Island own pickup trucks or golf carts but visitors are not allowed to bring their own vehicles.
Monhegan Island is presently home to 64 year round residents (2020 census), ranging from fishermen to artists. There is a school for 5 to 12-year-olds. High school students attend classes on the mainland.
The island about 0.7 miles x 1.7 miles and is laced with a 12-mile-network of hiking trails.
The former Tugboat shown in the photo is known as the ‘Wreck’ and lies on the southwestern corner of the island between Lobster Cove and Christmas Cove. Megan is in the blue shirt and her nephew Connor Nolan is standing atop the hull. In the rise beyond them is a simple memorial consisting of a white cross and wreath.
European explorers first frequented Monhegan Island beginning in the early 1600s. However, ‘crude rock carvings,’ known as the ‘”Monhegan Inscription” could indicate visits by Phoenician sailors as early as 200 B.C. It is possible they could even be substantially older: Archeologist Dr James Whittall feels “the inscription is written in Ogam script used by the Celts in the Iberian peninsula as long ago as 2000 B.C.”
Caleb, Megan & Jim https://billfrederickportfolio.com/2014/05/16/journalism-as-history-ii-the-phoenicians-in-maine/ 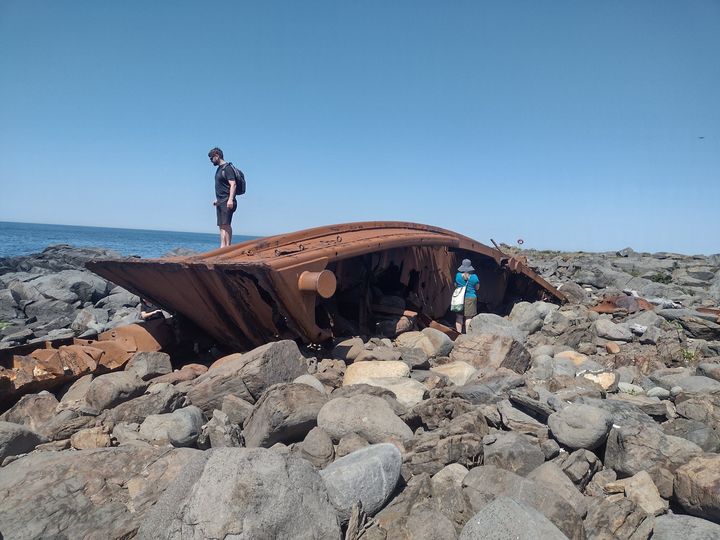