BIRD’S EYE VIEW OF BRIDGEWATER, MAINE. Beautiful Fall shot looking West taken by talented Aroostook photographer Paul Cyr from his death-defying powered-parachute.
Metropolitan Bridgewater (Pop. 532) is at bottom and that’s ‘Main Street’ (US Route 1) going from left to right. Virtually all big fields are potato fields either just harvested or in sod rotation waiting their turn.
Taking off from Main Street is arrow-straight three-mile long ‘Bootfoot Road’ (aka ‘Beauford’ and ‘West’ Road).
In 1803, while the District of Maine was still a part of Massachusetts. the 3-mile x 6-mile section of wilderness south of Bootfoot was named ‘Portland Academy Grant,’ and another 3-mile x 6-mile plot north of Bootfoot was named ‘Bridgewater Academy Grant.’ The two half-Townships were administratively combined into a single 6 x 6 mile Township. Since Maine already had one Portland, the Township in time became named ‘Bridgewater’ after the Massachusetts Town of the same name.
Like every other Aroostook Town, Bridgewater had been all woods and every field has been cleared from the woods.
Wood Prairie Family Farm is the last farm at the very ‘end of Bootfoot,’ abutting the resplendent North Maine Woods. The neighboring old Doss Morse farm is now the open green hay farm on the north side of Bootfoot. Our fields and buildings are mostly hidden by surround trees but if you look closely you can see a thin left-to-right tannish gap to the left of Doss’ and those are thirty acres of fields we’ve cleared. The hardwood-covered rise this side of them is ‘Estabrook Hill.’
In the distance, the Bootfoot arrow points to Saddleback Mtn, Number Nine Mtn and Spruce Top Mountain. Number Nine Lake is nettled in the bowl between them. ‘Number Nine Lake Road’ takes off perpendicular to the right at the end of Bootfoot and meanders for nine miles up to Nine Lake. Caleb, Megan & Jim 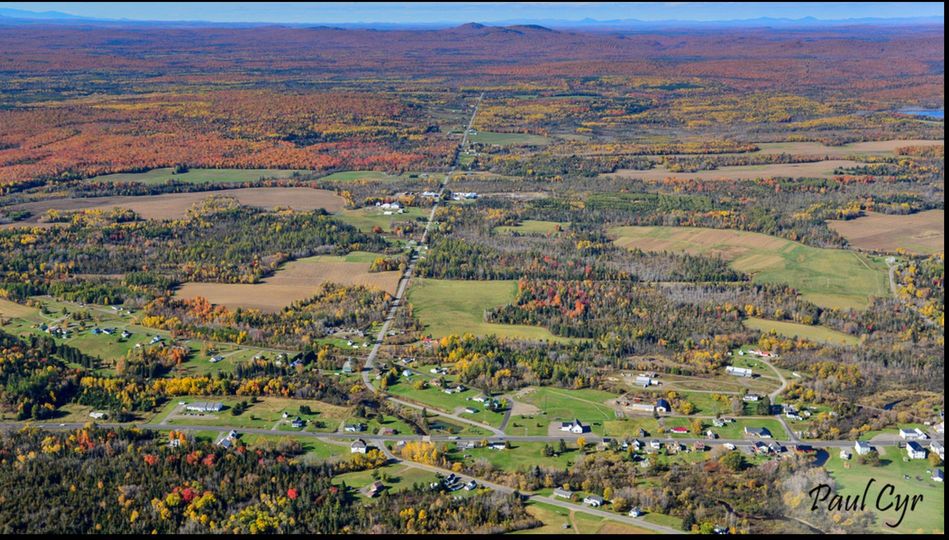