WORKING INTO THE NIGHT. With the weather forecast calling for over 2″ of rain – beginning this morning – both Caleb and Jim worked into the dark last night in order to get work done.
Jim continued to flame kill potato tops to get the crop ready for imminent harvest.
And in this shot, Caleb is holding the ‘stick’ or Surveyor’s Rod to determine whether he had excavated deeply enough to allow proper assembly of the footing forms for our new packing shed storage. A laser-apparatus attached to the stick works in tandem with the laser surveyor’s transit set out of harm’s way. When the depth is correct the stick unit emits both ‘beeps’ and flashing red lights signaling approval. This modern laser marvel eliminates one worker from the former two-man survey work.
We’ve fallen behind schedule from waiting two weeks for Versant to come out and disconnect our electric lines so we could further demolition and finish the excavation.
When the three man Versant crew finally arrived yesterday morning, it was headed by Matt Graves who 20 years ago was one of our star potato hand-pickers. He had entered the job market at the ripe age of twelve and for years was a reliable and fast picker for us.
Matt had just come back the day before from Pennsylvania where he was part of the lineman’s relief effort in the aftermath of Tropical Storm Ida. Caleb, Megan & Jim 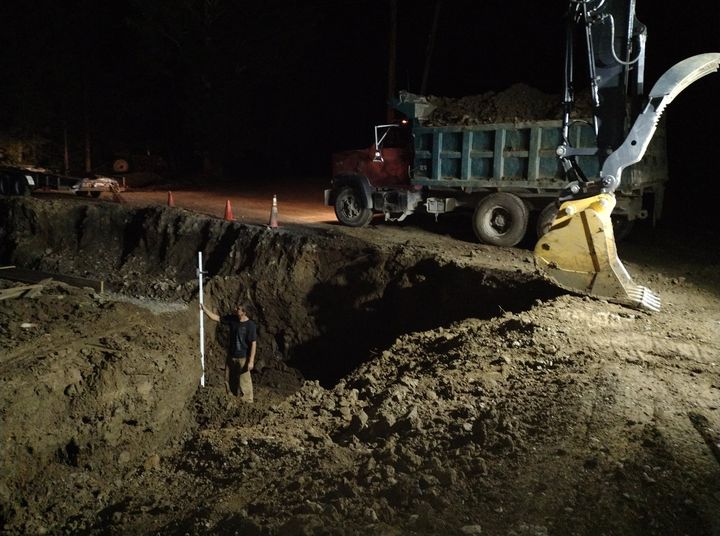