AROOSTOOK COUNTY POTATO FARMER WAITING IN LINE AT THE STARCH FACTORY. Caribou, Maine. Circa 1940. Photographer Jack Delano of the U.S. Farm Security Administration took this photo of an Aroostook County Acadian potato farmer waiting his turn in line. There had been almost 50 trucks waiting to be unloaded at the Caribou Starch factory.
It was a revolution when the railroad arrived in Aroostook County in the 1890s. Finally benefiting from efficient transportation to East Coast markets, Aroostook's potato acreage rapidly surged leading Maine to become universally known as the "Potato Empire."
Prior to the appearance of the railroads, the primary market for Aroostook potatoes had been the scores of local starch factories. These factories took raw potatoes and concentrated them into a dense, value-added product which could be profitably shipped.
Once the railroads opened up the market for Aroostook, the best potatoes were high-graded for food ("tablestock") and seed. The low-grade "pickouts" or culls went to supply the starch factories.
It is providence and an odd coincidence of history that shortly after the 1890s, the odd custom of wearing heavily starched, stiff and uncomfortable – but stylish – clothing ebbed and the enormous 19th century demand for potato starch began its precipitous decades of decline. Caleb, Megan & Jim 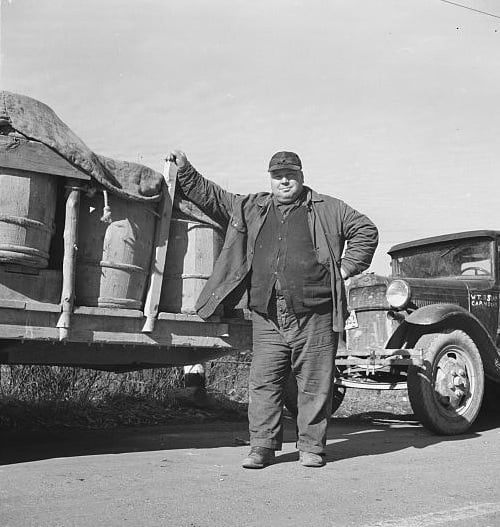