LOGGING CAMP IN AROOSTOOK COUNTY, MAINE. Circa 1895. Historically, in Northern Maine Winter was the prime season for logging. Packed snow allowed for clean twitching of logs with horses, free of dirt and mud which would otherwise dull sawmill blades. Roads could be iced over and that would allow for massive sled loads of logs that moved large amounts of logs from cutting areas to riverbanks. Millions of board feet of sawlogs would be stockpiled on for the duration of Winter. Then in the Spring at high water provided by snow melt the iconic river log drives would take place which transported logs to sawmills down river. In time, demand for paper-making pulp wood overtook sawlogs.
Typically, loggers (who commonly might be farmers who farmed during the growing season), would head into the isolated woods in the Fall and not come out until Spring. They would work every daylight hour for six days a week. Payday would be a winter's end.
Forty-five years ago on our farm on the edge of the North Maine Woods there existed an old, crude horse hovel which was used to shelter seven teams of workhorses (14 horses) used in 1950s and 60s logging operations on adjacent Great Northern Paper Company timberlands. Caleb, Megan & Jim 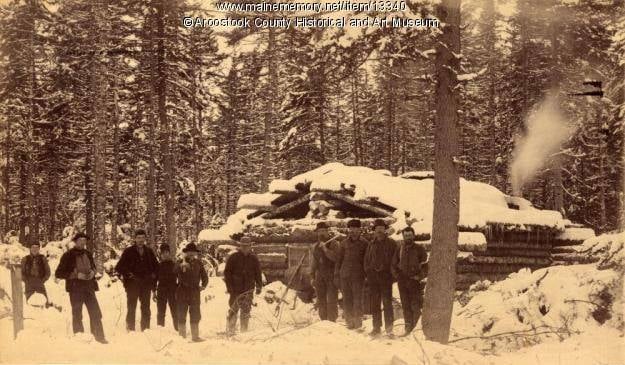