THE FALL WENDELL BERRY VISITED AROSTOOK COUNTY, MAINE. Circa 1984. We picked up Kentucky farmer and author Wendell Berry at the small airport in Presque Isle. In the remaining daylight hours we squired him around the fields of Central Aroostook. In time we parked by the side of the road when we came upon one of Smith’s massive fields where a large crew of farm workers were hand-harvesting jade green broccoli.
Our friend, Stan Scott, an English professor at nearby UM-Presque Isle was that year in charge of the outside-speakers-committee. Stan had miraculously been able to secure Wendell for a two-to-three day Aroostook visit in which among other events Wendell spoke before a large crowd at the college and answered questions posed by the honors English class at Presque Isle high school taught by Glenna Johnson Smith.
It was the end of October and by that time the Aroostook potato crop had for weeks been safely harvested and put away into local potato houses. What is now the 40-year old Aroostook broccoli industry had just gotten its start as a promising rotation crop for potatoes a few years before in 1980. The workers were hacking the broccoli heads with a harvest knife, then tossing those heads into an accompanying wagon slowly creeping across the field. We sat in silence watching the workers work.
After a while, Wendell – steeped in the labor-intensive hand-harvest of tobacco in Kentucky – began blow-by-blow detailed expert’s narration of process and the workers’ individual movements the rest of us were rather cluelessly watching. He singled out one man and noted how his motion was not as fluid as those of his co-workers. Wendell interpreted that after a long day of harvest this man’s back was troubling him and that in response he had adopted a certain back-saving technique so he could keep up with the work flow and make his back pain bearable.
That day we came to understand that there are deep layers that may well remain undiscovered. Some of us exist in a fog and others with the benefit of depth and experience reap a richer life harvest. We are fortunate on those occasions when circumstances line up and others share their bounty with us. Caleb, Megan & Jim 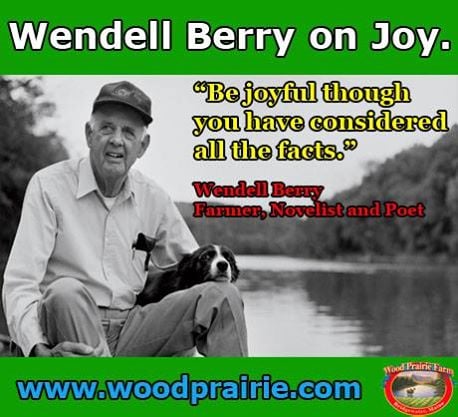