NEW STUDY EXAMINES RURAL CITIZENS' VIEWS ON CLIMATE CHANGE. Some of the viewpoints on Climate Change – in this polarized age – by rural residents are predictable.
However, when policies are farm-focused, rural support for dealing with Climate Change surges.
This new report from Duke University and Univ of Rhode Island examines rural attitudes.
Report highlights below are exerpted from Politico's 'Morning Agricuture.' Caleb, Megan & Jim

"Putting farmers front and center swayed voters’ responses, with more than 80 percent of those surveyed saying the money would be well-spent on such efforts. When farmers weren’t mentioned, that support dropped to 63 percent…

"The research is a deeper dive into rural voters’ attitudes toward climate change with a focus on the Upper Midwest, and it’s based on a poll of more than 400 people. The study follows a report published earlier this year that found that rural voters across the U.S. care about the environment just as much as their urban counterparts — but deep skepticism of government and other institutions can override their support for policies aimed at improving water quality or slashing greenhouse gas emissions.

"…The majority of rural, Midwestern voters felt that it was important for the U.S. to take action on climate change, but the level of concern is highly polarized along party lines." 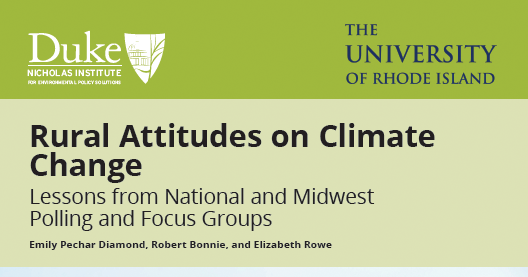 Following a nationwide report of rural attitudes toward the environment and conservation published in February 2020, this report takes a closer look at attitudes about climate change among rural voters. We draw on findings from the national study and incorporate new research with a regional focus on…