GAINING GREATER HISTORICAL CONTEXT FOR UNDERSTANDING CLIMATE CHANGE. A 'Sea Change' article by Marina Schauffler (https://pinetreewatch.org/sea-change-facing-a-reckoning/) provides good vantages for a better understanding of the impact of climate change.
Included is a link to an epic 171-page "Climate Chronolgy" by Dr. Sharon Tisher of UMO. Her stunning graphic depicts an effective southward march for the State of Maine – to current Mid-Atlantic temperatures – over a century, most of which is ahead of us.
The "Climate Chronlogy" makes clear our collective failures to grasp warnings, followed by inaction, goes back a very, very long time Jim

"As I stared at a graphic showing an outline of Maine symbolically shifting down the East Coast (see figure), I had an unsettling sense of déjà vu. The image depicted how – a few decades hence – summers in Maine will feel like those in New York and, by 2070, could resemble those around the Chesapeake Bay…

"In the mid-1800s, Irish physicist John Tyndall figured out that carbon dioxide and other atmospheric gases could trap heat. And by 1900, Swedish chemist and physicist Svante Arrhenius calculated how much warming would occur with a doubling of atmospheric carbon dioxide.

"The answers are complex, but some insights can be found in a troubling timeline of U.S. and international climate policy, a 'Climate Chronology,' created by Sharon Tisher, an environmental lawyer and longtime lecturer at the University of Maine…

"For Tisher, one 'huge irony' at the core of the climate crisis is that the United States – the largest historical producer of CO2 emissions – has “done the most to hold back the international community” in treaties aimed at reining in carbon pollution." 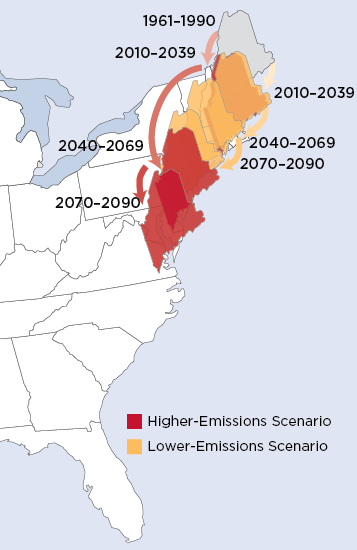 Found on Google from pinetreewatch.org