MAINE LOGGERS WOULD FINALLY RECEIVE ECONOMIC JUSTICE UNDER PROPOSED LEGISLATION. Our friend, Allagash logger Troy Jackson, is a Senator from Northern Maine, President of the Maine Senate and author of Maine LD 1459, which would for the FIRST TIME EVER give independent Maine contract loggers the legal right to collectively bargain for fair compensation.
Maine loggers have been exploited for generations and since loggers deserve justice, this bill deserves passage. Mainers please call you Legislators TODAY (https://legislature.maine.gov/senat…/find-your-state-senator).
This article provides excellent and concise background on Maine logger history. It is written by Dr. Jason Newton of Cornell who is writing a book on the history of loggers in the Northeast. Caleb, Megan & Jim

"For more than 150 years, the loggers who made Maine forest products have been denied a fair share of the profit they produce. This is because many loggers were categorized as 'independent contractors.' 'Contracting out' is a tactic that companies use to cut costs and prevent unionization, but in Maine this practice has a long history that voters and legislators should consider.

"Much of their income they drew from the woods, most identified as farmers, not wage working loggers. Wage working was connected with dependence and slavery in the early republic.

"Into the 19th century, 'farmer-loggers' continued to be enticed by the allure of independents. When competition from the West made most commercial farming in Maine unprofitable, thousands of farmers became financially dependent on the contracts they made with mills and landowners, thus becoming independent contractors…

"…During World War II, Maine established a program that brought Canadian loggers into the state to work temporarily. Mills and landowners tried to make Canadians into contractors when possible, sometimes employing Canadian families who lived in shacks on company land. In 1947, a Great Northern Paper company official wrote that: 'If a contract can be drawn that will make these shackers independent contractors we will be able to relieve ourselves of a great deal of responsibility and will be able to produce wood much cheaper.'" 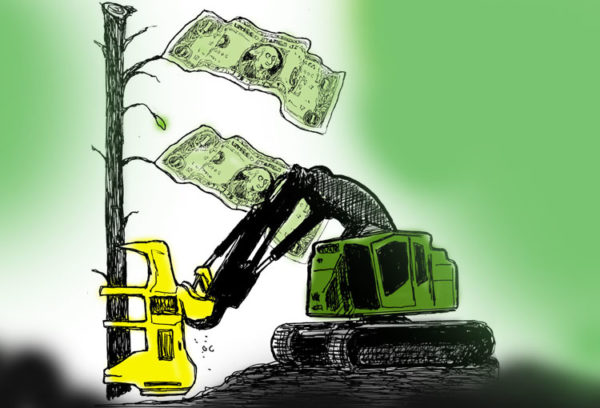 For more than 150 years, the loggers who made Maine forest products have been denied a fair share of the profit they produce.