POTATO HOUSE ROW, CARIBOU,MAINE. Circa 1949. Individually-owned, this long connected row of potato storages, known locally as "Potato Houses" is in "The Potato Empire" of Aroostook County, Maine.
Each potato house was separated from its neighbor by a foot-thick concrete wall which minimized risk of catastrophic fires.
It was common for such a string of potato houses to have been positioned alongside a railroad siding. However, no tracks are visible in this photo.
Aroostook County pioneered the use of highly-efficient cedar potato barrels, banded together by hand-shaved ash hoops ("huups," rhymes with books).
Each 11-peck barrel held 165 pounds of potatoes, and barrels were the universal standard unit of measure in Maine's potato industry.
Seed potato growers planned on needing 20 barrels of seed per acre. A hard-to-achieve goal for most farmers was to grow 200 barrels per acre (33,000 pounds or 330 "bags" or cwt). In the Fall, 'Hand Pickers' were paid piece-rate by the barrel.
And of course, the farmers' fate was reliant upon the sale of Aroostook County's annual massive potato crop. Each deal was negotiated as a price of dollars per barrel. Jim 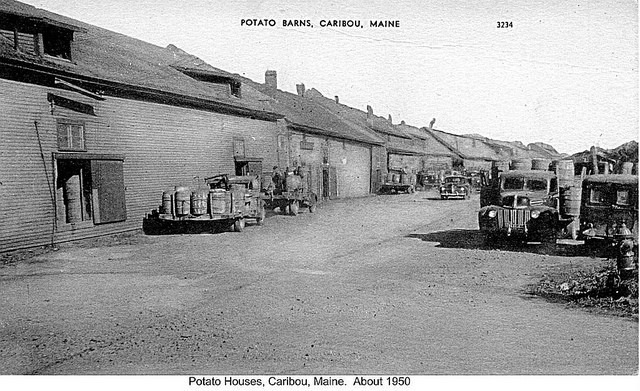