FIRST-HAND-ACCOUNT OF A MAJOR THANKSGIVING BLIZZARD IN 1951 HERE IN AROOSTOOK COUNTY, MAINE. Dana Thompson grew up on a potato farm and as was common in that era, went onto spending a lifetime growing potatoes near Loring Air Force Base.
He relates the interesting story of a powerful, early blizzard and how a tight community came into play during very difficult, life-threatening conditions. Jim

"I was a boy of 8 in November 1951. Our family farm was located on the Madawaska Road in Caribou at the corner of the cross road which ran eastward to the west gate road for the Air Force base under construction. The farmhouse was home to our family of five: my parents Olin and Avis along with my younger brothers Olin Jr and Roger; paternal grandparents Fred and Idella and bachelor uncle Charlie…

"On the morning of Nov. 27, my father began his usual morning chores around 4:30 am. He started by lighting a fire in the kitchen’s wood cookstove then turned on the outside light to see how much snow the previous day’s storm had dumped in the dooryard. He saw that it was still snowing and blowing with large drifts everywhere and in fact, there was enough snow drifted that he could not force the door open so he left it and proceeded to the basement to put wood into the home’s main furnace.

"On his way back upstairs, he heard very loud pounding on the door. He looked out to find an unfamiliar man with icicles hanging from his clothes, hair, beard, and eye brows which prompted Dad to ask, “Who are you? What are you doing here?”

"The stranger replied, 'I’m stuck out on the cross road. I’ve come to your house to get help'…

"In hopes of plowing the snow, Dad cranked up the John Deere A but the tractor was not able to move the 14 feet, 9 inches of drifted snow that had fallen. Dad said the only way to open the road would be with a 'V' plow, something they did not have on the farm…Each trip out to the cross road was easier as the John Deere A made a beaten path while bringing the men in from the bitter cold. Meanwhile, Uncle Charlie made a big fire out in the barn woodworking shop. Dad brought the men – 16 in total – into the barn workshop so they could warm up. The men had been at work on the base when the storm started. Most were not dressed for the weather and wore neither heavy coats nor appropriate winter boots.

"When Mom heard that there were 16 cold, hungry men in the barn, she started cooking a hot, hearty breakfast of oatmeal with cream, homemade toast made on baker sheets in the wood stove, pork chops and fried eggs. Mom had to feed her family and visitors in shifts but everyone left her table with a full belly…" 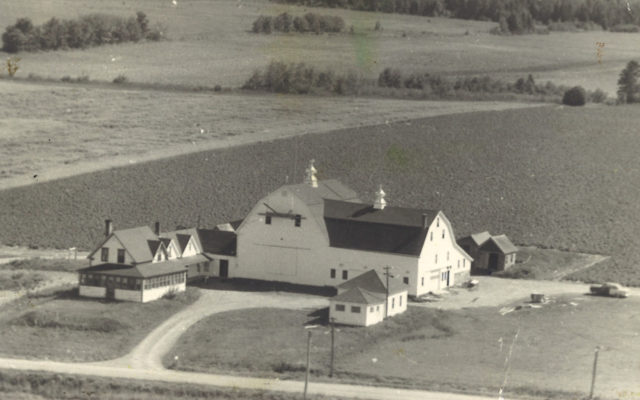 I was a boy of 8 in November 1951. Our family farm was located on the Madawaska Road in Caribou at the corner of the cross road which ran eastward to the west gate road for the Air Force base under construction